3 Die In Accident On Tema-Afao Road 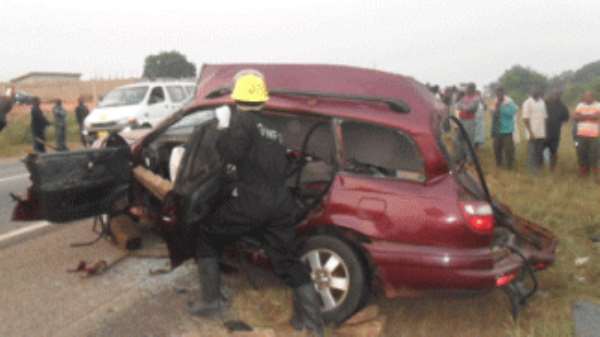 It took a combine team of Fire Service and Police personnel over two hours to cut through a Toyota saloon car to retrieve the remains of three men, whose vehicle collided with another vehicle while taking on the Tema-Aflao road, resulting in their instant death.

The three, in their late 30s, died on the spot in the early hours of Saturday when the Toyota Carina E, with registration number GR 5767 Y in which they were travelling was dragged into a ditch by an oncoming tanker between Miotso and Dawhenya.

Inspector Emmanuel Degboem the leader of Dawhenya police patrol team which arrived on the scene minutes after the accident, told the Daily Graphic that at about 4:45 a.m. the saloon car heading towards Accra attempted to overtake a trailer without regard for an oncoming tanker.

Inspector Degboe said in the process the saloon car drove head-on into the taker with registration number AS 9566 D, which was on its way to Ada.

The tanker loaded with premix, dragged the car over 50 metres before it eventually run into a ditch.

Although the deceased were not identified at the time of filing this report, the team of Police and Fire Service took the badly deformed bodies to the nearest hospital.

The driver of the tanker whose name was given as Ebenezer Nartey, could not be immediately found at the gory accident scene but his mate, Adjetey Mensah, told the Graphic reporter that his master had been rushed to a nearby clinic for first aid.