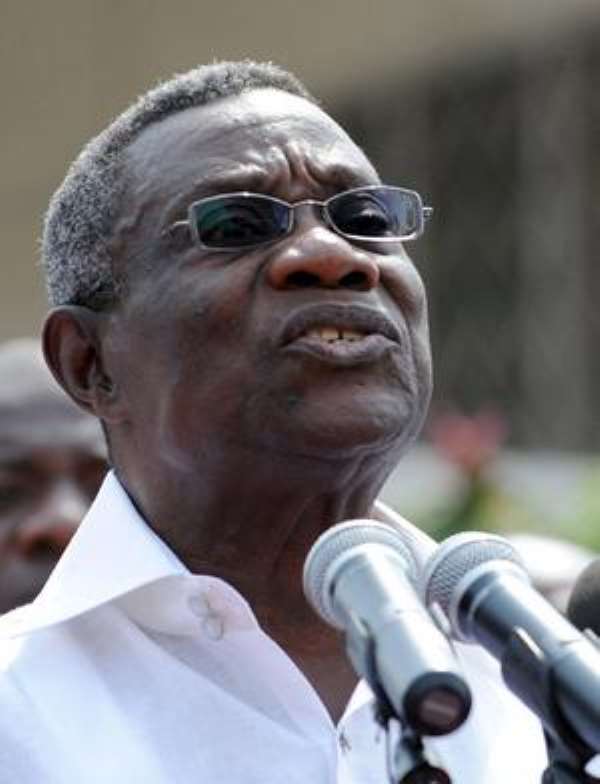 Accra, Jan 1, GNA - A few hours after returning from the United States of America, President John Atta Mills on Saturday joined worshipers at watch-night services at the Action Faith Chapel and the Legon Interdenominational Church (LCI), both in Accra, to usher in the 2012 New Year.

Wearing an all white "Agbada", the President who has often said, “God is the President of Ghana” in acknowledgement of his source of strength, emphasized at both churches, the need to give thanks to God for his grace and goodness for the past year, expressing strong hope that 2012 would be a better one.

Archbishop Nicholas Duncan-Williams and Rev Yaw Boamah of the Action Faith Church and LCI, respectively, prayed for divine blessings, wisdom and direction for the President and his team during the coming year.

The arrival of the President, who turns 68 next July, and is seeking re-lection in Ghana's December 2012 polls, was heralded with a song by the congregation “Double Double”

In appreciation to a song ministration by Ella Duncan Williams, a daughter of the Founder of the Action Faith Church observed that “anything we honour is what we attract.

“It is important that we realize the goodness of the Lord and give thanks,” President Mills said.

He expressed gratefulness to God for taking his Administration and Ghana through, despite some hard times experienced last year.

President Mills together with the congregation sang heartily, a song, “Aseda Nyinaa Ye Wode, (All Thanks Belong to you), before leaving for the LCI, where Rev Yaw Boamah, a Minister at the Church, espoused the theme: “God is More than Able,” and explained the infinity of God's ability to use his supreme and mysterious power to help man deal with very challenging situations.

“As a nation, we face more challenges, but the encouragement is that God is more than able,” Rev Boamah said, adding “God's ability is not about magic, not a puzzle, but an infinity when probed very deep; it is a miracle.

President Mills said he had worshipped at the Church when he lectured at Legon, adding, “When I was returning from the US, something was telling me, you must spend the watch-night with people from your roots.”

The President urged Ghanaians to continue to give thanks to God for the abundant blessing he had showered on the nation.

”God loves this nation; God is the President of the nation,” President Mills said, and reminded people in leadership positions to fulfill the duty to use the resources entrusted to them to the benefit of the people.

There were song ministrations. Mr Koku Anyodoho, Director of Communications at the Office of the President, led the congregation to sing “We Bless You Lord” and Aseda Nyinaa Ye Wode,” describing it as favorites of the President. .

It was all thrill and excitement as congregants sang “It is Raining All around me,” amidst, handshakes, hugs as congregants wished one another a “happy and prosperous new year.