If it is not A or B it must be C: A Stealthy Killer on the Prowl 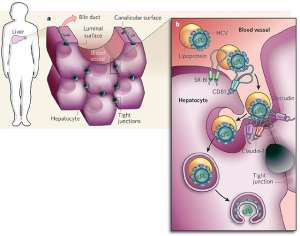 (CNS): Till the early 70s, nothing much was known about hepatitis C and it was called NANB (not A not B). Its genome could be cloned only in 1989. The Hepatitis C virus (HCV) has 6 different variants - genotypes 1, 2, 3, 4, 5, and 6. Within each genotype are further divisions called subtypes and mutations of the hepatitis C virus called quasi species. This variability of the virus has made it difficult to treat it and to develop a vaccine that will protect against all strains of HCV.

The World Health Organization lists HCV as a major cause of acute hepatitis and chronic liver disease. Globally, 3 to 4 million persons are newly infected each year. Various blood bank studies indicate that an estimated 1% of the Indian population is affected with this virus. So in a 1,210 million population about 12 million would be infected with Hep C Virus (genotype 3 and 1), which is a huge number.

HCV is mostly transmitted by infected body fluids that get into the body through infected needles/syringes, unsafe blood transfusion, sexual contact, and mother to child transmission (5% risk). According to Professor (Dr) Gourdas Choudhuri, Head of the Gastroenterelogy Department of Sanjay Gandhi Post Graduate Institute of Medical Sciences (SGPGIMS), Lucknow, “In India, hospitals too are a source of infection. Although most modern hospitals now use disposable syringes/needles, reusable accessories are used for some invasive procedures, (like cardiac angiography, or some procedures involving gastrointestinal tract), in order to reduce costs, and this poses a bit of risk for Hep C. So sterilisation process for these accessories should be done meticulously and monitored closely. Also, despite good testing, the blood used in transfusion may contain the HCV. There is something called the window period, and there are instances where despite a very good test performed on the blood we come across post transfusion Hep C. The recent vogue of tattooing is another proven risk factor for HCV.”

Hepatitis C is indeed a difficult disease by way of diagnosis and treatment. The virus can remain in the body without manifesting itself for a long period. In its early stages, there are virtually no symptoms, making timely diagnosis very difficult. By the time symptoms appear, the liver is already shrunken, cirrhosis has set in, and the person is beyond the stage of treatment. So it is important to test high risk individuals even if they do not have any symptoms. As both HCV and HIV get into the body through the same routes of transmission, they are very likely to co infect the same people. Hence people living with HIV are a high risk group, and so are the injecting drug users. People who have been transfused inadequately tested blood are also at risk.

In an exclusive interview given to CNS, Dr Franco Buonaguro, Director, Unit of Molecular Biology and Viral Oncology, Napoli, Italy, informed that, “The risk is completely different in men and women. In women the disease may not manifest at all, but in men it may become a major problem within 20 years. A young woman would probably live for over 40 years without any symptoms. My mother has HCV which she got through an infected syringe in the 60s, when we did not have disposable syringes in Europe. But, as she is a woman, does not drink, and does not have other cofactors, her RNA levels do not move up. But for a young man with alcohol addiction, it is less than 10 years.”

He further said that, “Hep C can be treated with a combination of pegylated interferon and ribavirin. The treatment response is 46% in patients with Genotype 1 and 76% in patients with genotypes 2 and 3. But in case of people living with HIV and co-infected with HCV, the response reduces drastically to 20% for genotype 1 and 62 % for type 2 and 3.”

In a country like India, the high cost of diagnosis and treatment of HCV poses a big challenge. For people who do not clear the virus spontaneously from their body and develop chronic forms of the disease, treatment is currently unavailable in the public healthcare system and unaffordable in the private sector.

According to Prof (Dr) Choudhuri, “The first diagnostic test, called anti HCV, costs Rs 500. So, at times doctors are reluctant to ask for the test in the beginning, even in people who might be at high risk. If this test is positive then one has to undergo two more tests—HCV RNA and HCV genotyping, which together cost around Rs 12000. Thereafter if the person is a candidate for therapy, it is usually a 6 to 12 months long treatment costing around Rs 2.5 lakhs. Besides, the treatment is too long and fraught with many adverse effects—fever, haemoglobin drop, anaemia, WBC count fall, depression—not a pleasant experience.”

So what is the way out? Dr Choudhuri feels that, 'We need to create a lot of awareness about the disease as most people are unaware of it. High risk individuals must go for diagnosis much before symptoms appear. Secondly there should be good hospital practices, more stringent testing for HCV in blood banks, use of disposable syringes/needles which are not reused, and very good management/control of intravenous drug use.”

“In fact, there is some good news on the cost front. Till now only two companies (Roche and Schering-Plough) in the world were making pegylated interferon which was quite expensive. Now two Indian companies (Ranbaxy and Cadilla) have launched it in India, bringing down the treatment cost for genotype 3 to about Rs 1 lakh which is a little more affordable. Manufacture of low cost generic medicines can also help. But the only issue is that while generics are well established for chemical compounds, where efficacy can be tested, HCV drugs have to be tested in terms of bio efficacy too, and not just by way of chemical structures. So there will need to be a little more reassurance from companies launching generic interferons about their effectiveness.”

Of late the demand for providing free treatment for HCV in India is gaining ground, especially by people living with HIV (PLHIV) who are co infected with HCV. Although HCV treatment is free in many developed countries, Dr Buonaguro strongly believes that, “It depends upon society and economy of the country if HCV treatment is to be part of government health program. The priorities may be different if there are other diseases killing people in a very short time—cholera, malaria, etc. I would suggest that, as genotypes 2 and 3 are very responsive to treatment, government can help in their treatment. But if the patient has to pay, I would advise the patient to opt for treatment if it is genotype 2 or 3, as there is high chance of success. But if it is number one, one must seriously think if it is really worthwhile to begin treatment.” (CNS)