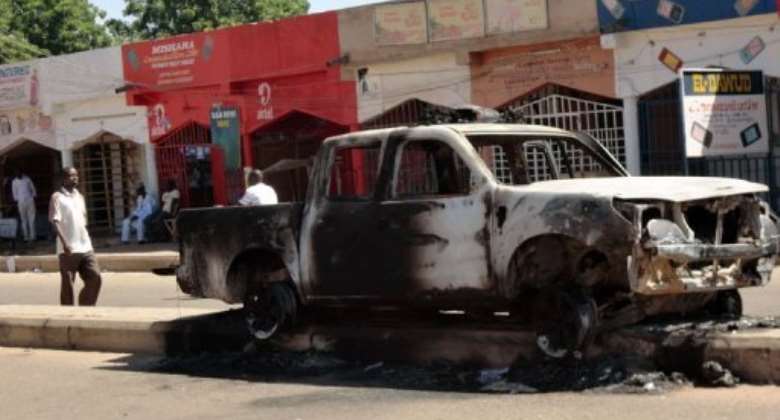 "We have at the moment an estimated 90,000 displaced people from the Damaturu violence," said Ibrahim Farinloye, northeast coordinator for the National Emergency Management Agency.

"Around 40,000 of this figure is from the Pompomari area, where the whole neighbourhood has been deserted. Some of the displaced have lost their homes, while others just fled for their security."

Farinloye said "we advised the displaced against moving into any temporary camp for security reasons, therefore most of them are sheltering in the homes of friends and relatives in the city and neighbouring villages."

Heavy violence broke out in Damaturu last week, with suspected members of Islamist group Boko Haram carrying out attacks followed by a military crackdown. A rights group and police source said up to 100 people were feared dead.

Trucks and armoured vehicles carrying soldiers had arrived in the Pompomari neighbourhood and residents were given 30 minutes to leave. The neighbourhood was later cordoned off.

Further violence broke out in Damaturu on Christmas, when two explosions went off, including a suicide attack targeting a military convoy in front of a secret police building.

The Christmas bombs were among a wave of attacks in Nigeria the same day blamed on Boko Haram that killed 40 people, with the deadliest an explosion outside a church near the capital Abuja as services were ending.

Nigeria's northeast has long been rocked by violence blamed on Boko Haram, but attacks are intensifying and growing more deadly. The bombs that targeted churches on Christmas have also sparked fears of renewed sectarian clashes.

Nigerian leaders have sought to calm tensions since the attacks, urging Christians not to retaliate.

The country, Africa's most populous nation and its largest oil producer with 160 million people, is roughly divided between a mainly Muslim north and predominately Christian south.

In the wake of the clashes and Christmas Day attacks in Damaturu, located in Yobe state, hundreds of residents could be seen seeking to flee the city, waiting by the roadside or at depots for taxis or buses.

The city centre was largely deserted and tense soldiers armed with rifles patrolled.

Boko Haram was long based in the northeastern state of Borno, which neighbours Yobe, but it has carried out a series of attacks in Yobe in recent weeks.

In early November, coordinated attacks in Damaturu left an estimated 150 people dead. Violence has also hit the nearby city of Potiskum.

Nigerian authorities have been unable to stop the violence despite heavy-handed crackdowns and claims of arrests of Boko Haram members.