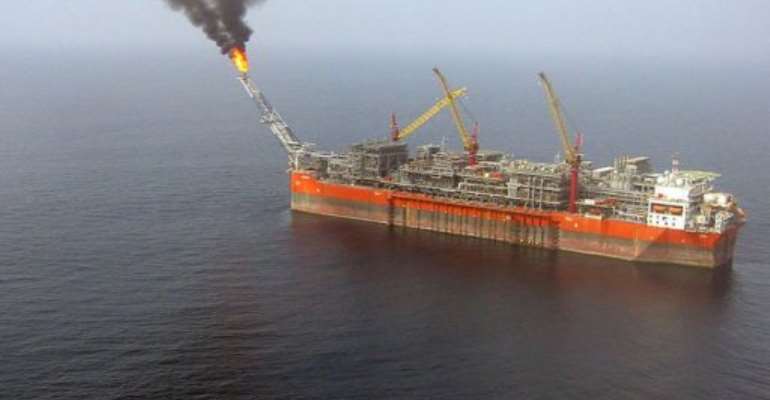 LAGOS (AFP) - Authorities rushed to prevent one of Nigeria's worst recent oil spills from reaching the West African nation's shoreline on Thursday, with production from a major Shell field also shut due to the leak.

Shell, which said the leak has been stopped, has estimated that less than 40,000 barrels of crude have spilled into the sea and was deploying ships with dispersants to attack the slick. Planes were also being mobilised.

It was Nigeria's worst offshore spill since a 1998 Mobil incident, officials said, though onshore leaks have been estimated at levels far worse since that time in the oil-producing Niger Delta.

"It's about the same level with what happened in 1998 with the Mobil oil spill," said Peter Idabor, head of the National Oil Spill Detection and Response Agency.

"The oil slicks went down the whole coast line and beyond Nigeria's borders."

He said, however, that Nigeria was better prepared this time, with some 210 tonnes of dispersant being prepared to attack the spill, which has spread to an area between 35 and 45 miles (about 55 to 70 kilometres) in size.

Environmental group SkyTruth, using satellite imagery from Wednesday morning it published on its website, estimated the slick was 70 kilometres long and 17 kilometres wide at its widest.

It said it covered 923 square kilometres (356 square miles) of ocean.

Idabor said it was unclear when the oil slick could reach the shore. London-based Oil Spill Response Limited was to be involved in the clean up, he said.

The slick was moving in the direction of Forcados, which is located along the coast of Nigeria's Delta state, he said.

Nnimmo Bassey, the Nigeria-based head of Friends of the Earth International who has closely monitored spills in the country, called it a major incident and pressed for an independent analysis of the amount of oil leaked.

"We can see a real threat to livelihood to fishermen and local communites onshore," he said.

The leak occurred Tuesday at Shell's Bonga field some 120 kilometres off Nigeria, Africa's largest oil producer and an OPEC member. Production has halted at the field, which has a capacity of 200,000 barrels per day.

The company claimed Thursday that "up to 50 percent of the leaked oil has already dissipated due to natural dispersion and evaporation," but that figure was impossible to verify independently.

Bassey cast doubt on the figure, saying "I don't believe that 50 percent would disperse over just less than two days."

Shell said it was deploying vessels and mobilising planes to fight the spill with dispersants.

The company said the leak occurred during a transfer of crude to a waiting tanker. The likely source was an export line linking a production vessel to the tanker, it said.

Nigeria has been producing between 2.0 and 2.4 million barrels per day in recent months.

Scores of oil spills have occurred in the country, but most have been onshore, particularly due to pipeline sabotage aimed at stealing crude to sell on the black market as well as militant attacks.

Activists say Shell and other companies have not done enough to prevent oil leaks at their facilities.

The UN released a report in August saying decades of oil spills in the Nigerian area of Ogoniland may require the biggest cleanup ever undertaken, with communities dependent upon farmers and fishermen left ravaged.

Activists say two spills in the Ogoni community of Bodo in 2008 amounted to hundreds of thousands of barrels, but Shell disputes that figure and says it was far lower.

Amnesty International has estimated that if all types of oil pollution in the vast Niger Delta -- the country's oil-producing region -- are added up over the past half-century, it would be "on par with the Exxon Valdez every year over the last 50 years."