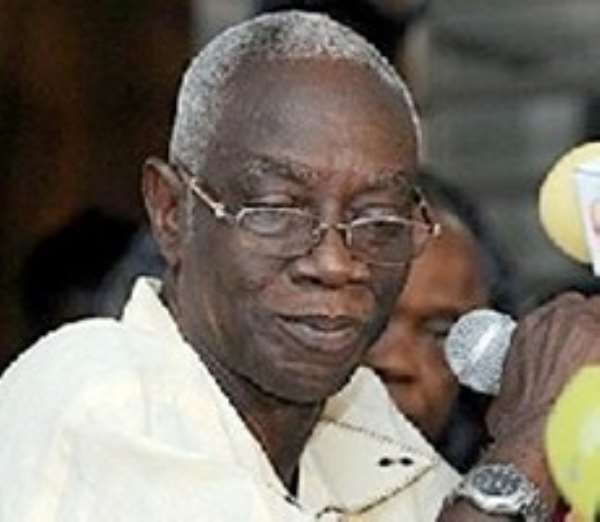 The government has made a strong commitment to provide the entire budget of the Electoral Commission (EC) for the conduct of the 2012 general election.

The EC will require GH¢236,057,817 for the conduct of the 2012 elections and the Minister of Finance has assured Parliament that the amount will be provided for the elections, including the replacement of the voters register, exhibition of the new register, the conduct of the presidential and the parliamentary elections, the election day verification of voters and a possible run-off of the presidential election.

These were contained in the report of the Special Budget Committee of Parliament on the 2012 budget of the EC which was signed by the Chairman of the committee, Mr Cletus Avoka, who is also the Majority Leader.

According to the report, the committee was informed that GH¢120 million had been provided for the budget under the reserve expenditure vote solely for the EC for the conduct of the elections, while an additional GH¢12,526,081 had been provided in the normal budget of the EC in excess of its request for its normal operations to meet part of Election 2012 related activities to bring the total election budget provision to GH¢32,526,081.

The committee recommended that given the urgency of the biometric registration exercise and the elections and the lengthy procedure for the release of the funds by the Ministry of Finance, the EC should submit its cash-flow plan to the ministry on time in order that funds would be made available as and when required for any activity.

“The committee, after a careful examination of the draft estimates, accordingly recommends to the House for approval GH¢27,389,067 for the normal operation of the EC for 2012,” the report said, adding, “The committee recommends that the House takes cognisance of the assurance from the minister responsible for Finance to provide an amount of GH¢149,057,817 (that is, GH¢236,057,817 minus the GH¢50 million already released and the GH¢37 million being processed for payment) needed for the conduct of the 2012 elections.

Contributing to the ensuing debate, the Member of Parliament for Manhyia, Dr Matthew Opoku Prempeh, said even though the commitment of the government towards the conduct of the elections was commendable, there was the need for timeous releases in order not to jeopardise the work of the EC.

He called for efforts to gazette the results of the elections at the polling stations, adding, “We should not be content with the gazetting of summary results as decided at the Inter-Party Advisory Committee (IPAC) level”.

For his part, the Minister of Communications and MP for Tamale South, Mr Haruna Iddrisu, said notwithstanding its financial challenges, the EC had done well over the years in the conduct of successful elections.

He explained that even though the provision of a biometric voter's register and the verification of voters on the day of the elections were good, those measures could not totally guarantee free and fair elections unless the political parties took up their responsibility of ensuring violent-free elections.

“We should train our electoral officers and party agents to be vigilant to ensure that the results declared at the polling stations are the same results sent to the headquarters of the EC,” he said.

The Minority Leader, Mr Osei-Kyei-Mensah Bonsu, said it was unfortunate that the EC had not budgeted for the provision of an additional verification machine at the various polling stations to serve as a back-up.

He was also not happy with the proposed increase of the number of voters at polling stations in the cities from 750 to 1,200 people, saying that even Nigeria which had a population seven times more than Ghana's had 500 people to a polling station.

The MP for Aburi/Nsawam, Mr O.B Amoah, said even though the EC had in mind to set up more constituencies, no budget had been earmarked for the proposed creation of those constituencies.

For his part, Mr Avoka praised the EC for creating for itself a positive image and called on politicians not to “give it a bad name in order to hang it”.

He noted that the tendency of politicians to give the EC a bad name and turn around to praise it when they were in government was not the best, saying, “We should give praise where praise is due”.