NDC calls for national dialogue on the economy 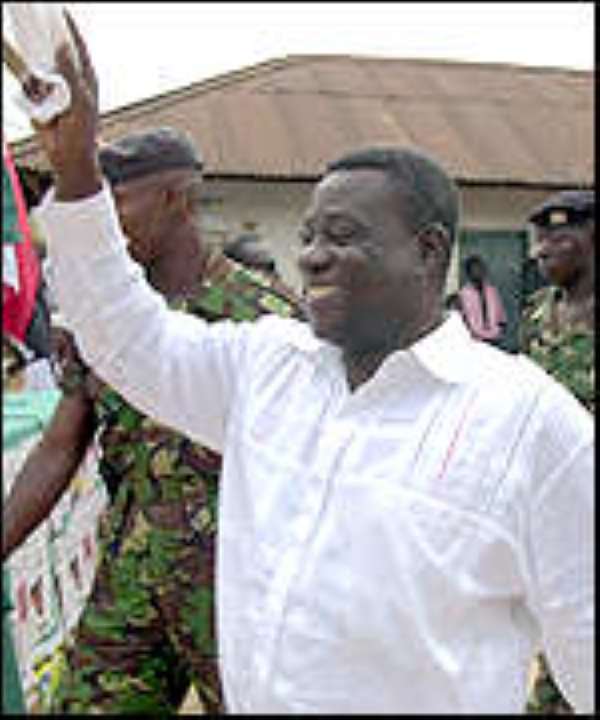 Accra, July 3, GNA - The National Democratic Congress (NDC) on Thursday called on the government to enter into dialogue with other political parties to pool ideas to bring down the high cost of living in the country. "It is not too late for President John Agyekum Kufuor and his NPP Administration to take immediate steps along the line of dialogue and brainstorming to tackle the economic crisis to reduce the hardships facing our people," Professor John Evans Atta Mills, NDC flag bearer for the 2004 elections, told Journalists at a press conference in Accra on Thursday.

The National Chairman of the party, Dr Obed Yao Asamoah, the General Secretary, Dr Nii Josiah Aryeh, the Director of Communications, Mr John Mahama and other leading members of the party attended the packed press conference. It was to outline the party's position on the state of the economy, the political terrain under the NPP Administration and the general assessment of living conditions in the country. Prof. Mills offered an eight-point suggestion to the government that, according to the NDC, would give Ghanaians "the needed respite" from the economic hardships.

The suggestions included measures to ensure a reduction in the inflation and interest rates and taxes that are "crippling the economy and the private sector in particular". Prof. Mills said the Government must freeze the diversion of resources into the HIPC Relief Fund and pay in full the amount owed the District Assemblies' Common Fund, the GETFund and the Road Fund. It should also ensure that contractors and suppliers are paid in full. "If this is done the problems associated with the payment of only 30 per cent Senior Secondary School subsidies and Teacher-Trainee allowances will abate."

Prof. Mills also suggested that the government re-prioritised the HIPC Relief Fund and channelled the resources into key social sector projects such as the rehabilitation of the Tamale Regional/Teaching Hospital and the Korle-Bu Teaching Hospital. It also urged government to watch the country's debt portfolio, make health and education accessible and affordable to all through the adoption and implementation of pragmatic and self-reliant economic policies.

Prof. Mills appealed to the media to "join forces with the people, sympathise with them and articulate their needs. "Once, too often, our people are diverted from the problems of their existence." "I call on you, my brothers and sisters of the media, not to be afraid to talk about the economic hardships and the corruption of today. You did it when the NDC was the ruling Government. You owe it to the people of this country to do it whilst the NPP is the ruling Government."

Prof. Mills said this call might not have been necessary, if the corruption of the NPP was not hurting the people of this country. The NDC Flag bearer, who was the former Vice President, said: "Governments are elected to respond to the needs of the people, not to attend to perceived sins of yesteryear. "Two-and-a-half years have been wasted by the NPP administration looking for evidence of yesteryear's corruption that does not exist, whilst they have closed their eyes to the corruption of today."