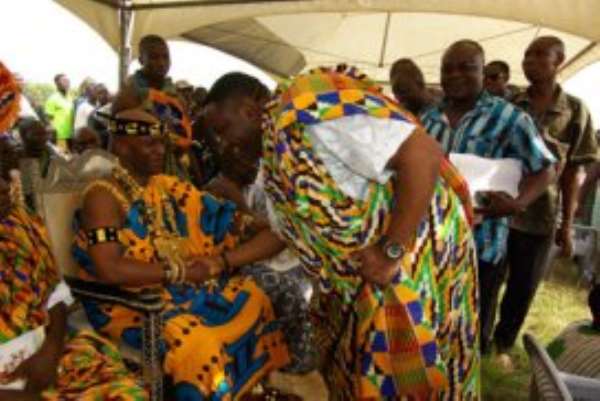 The Deputy Minister for Local Government and Rural Development, Mr Elvis Afriyie Ankrah, has called on the chiefs and people of the Battor Traditional Area to unite as one people to encourage the government to implement development projects in the area.

He said this at the annual Hogbeza celebrated by the people of the Battor Traditional Area.

The minister, who represented the Vice-President, Mr John Dramani Mahama, said the government valued the significant roles the area had played in the socio-economic development of Ghana, considering the educational fund created by the paramount chief of the area to promote quality education for the people.

He pledged the government’s readiness to enhance the fund so that more schoolchildren would benefit from it.

Mr Ankrah said the government had put in measures to ensure that the district benefited from the US$3 billion loan facility which would facilitate the easy running of the area and, therefore, urged the people to support whoever would be chosen as the district chief executive for the area.

'A community without quality education and good moral standards is not worth living in,' he noted.

He used the occasion to appeal to the chiefs and opinion leaders in the area to ensure that they developed pragmatic ways to inculcate discipline in the youth.

Mr Ankrah expressed the readiness of the government to initiate plans to encourage the youth to go into agriculture and other creative ventures so that they would be self-reliant and be able to contribute their quota to the development of the country.

He promised the chiefs and the people of the Battor Traditional Area that the government would continue to ensure that all promises made to them were honoured and urged them to continue to support the government to bring absolute development to the area.

He later advised the people to ensure that they registered during the biometric registration for the 2012 general election, so that they would be able to vote massively for the NDC.

The Paramount Chief of the Battor Traditional Area, Togbega Tatamia Dzekley VII, in an address, commended the chiefs and people of the area for their massive turn out for the 2011 Hogbeza.

He said the celebration of Hogbeza by the people served as an annual reunion of the people for fund-raising, merry-making, socialisation and to focus on the development of the traditional area.

Togbega Dzekley used the occasion to commend the government for completing the ground floor of the Roman Catholic JHS project by the North Tongu District Assembly which was initiated by the Battor community, the construction of a six-unit classroom block for

He appealed to the government to upgrade the two senior high schools in the traditional area to full boarding schools, with one of them becoming a Science Resource Centre.

He expressed his appreciation to President John Atta Mills for creating the new North Tongu District, with Battor-Dugame as the district capital, and assured him that the people would support the district chief executive to bring development projects to the area.

Togbega Dzekley called on the government to consider hooking some of the towns in the area onto the national electricity grid, as they had spent their meagre resources on providing poles for the electrification project which started in 2004.