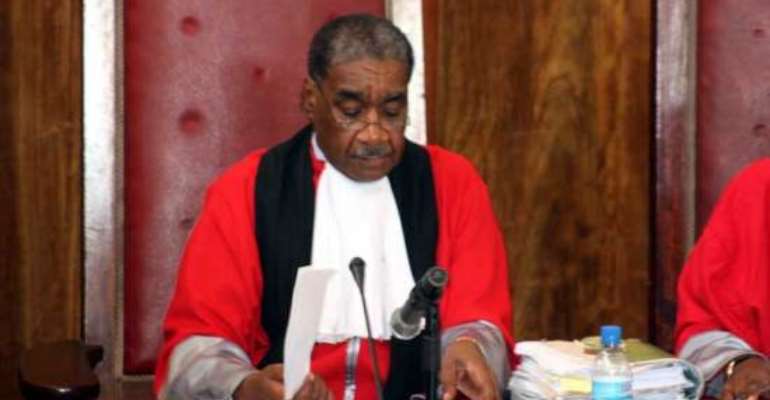 Accra, Dec. 18 – Justice Augustino Ramadhani, a Judge of the African Union (AU), has commended the Association of Tanzanian's in Ghana (ATIG), for spearheading efforts at building and maintaining good relations between Ghana and Tanzania.

Justice Ramadhani, who is also immediate past Chief Justice of the United Republic of Tanzania, made the commendation at a cocktail party in Accra organised by ATIG to celebrate Tanzanians 50th independence anniversary.

He also lauded ATIG for its role in promoting regional, social, political and economic integration, describing it as “worthy of emulation”.

“We must build on the foundations laid by the founding fathers; we need to collaborate in all areas, particularly the economic front,” Justice Ramadhani said.

Tanganyika became independent in 1961, Zanzibar in 1963 and on October 29 1964, the United Republic of Tanzania was proclaimed.

Mr Jakaya Mrisho Kikwete, 61, is the 4th and current President of the United Republic of Tanzania. He assumed office in December 2005 and was re-elected in 2010.

Tracing the relationship between the two countries, Justice Ramadhani, noted: “Ghana and Tanzania have over the years enjoyed a very cordial working relationship, which is evidenced by Dr Nkrumah sending Alhaji Bashiru Kwaw-Swanzy, a renowned Ghanaian attorney to Zanzibar on an international assignment in 1961.”

Alhaji Kwaw Swanzy, he observed, successfully obtained the acquittal of some members of the Afro-Shirazi Party who were indicted for murder in the riots that erupted in 1960.

In recognition of his distinguished professional services, the Zanzibar government appointed him Attorney-General in 1983.

Justice Bernard Makgabo Ngoepe, Judge-President of the Pretoria High Court and also a Judge of the AU Court of Physicians for Human Rights congratulated Tanzania for the Golden Jubilee, adding that the bond between South Africa and Tanzania is very strong.

“Tanzania in more ways than one is a second home for South Africans, therefore celebrating this anniversary with you is a real honour and pleasure,” he noted.

Dr Kodzo K. Alabo, Director of the Africa and Regional Integration Bureau at the Ministry of Foreign Affairs, observed: “Ghana and Tanzania have come a long way, thanks to the solid foundation laid by the founding fathers.”

“We need to build on this foundation…how come Tanzania and Zanzibar were able to come together in 1964 and are still together? This tells us that African integration is possible if properly managed,” he emphasised.

Mr David Christian, the acting Secretary of ATIG who spoke on: “A brief history and Socio Economic Background of Tanzania,” highlighted key areas such as Tanzania's History and the special role played by the Founding Father, “Mwalimu Nyerere.”

He also touched on Nyerere's Legacy, Nationhood and Union, African Liberation, Socialism and Self Reliance, Economy, Agriculture, Tourism, Mineral Resources and Mining, Prospects, Politics and East African Community and the “Hopes, wishes and aspirations for the next 50 years.”

Mr Christian said: “The vision and mission of ATIG is a noble and worthy one as it will facilitate regional integration. We therefore call on everybody to support our efforts,”

“We will strive for excellence in all we do and as worthy ambassadors; we will always do things that will give Tanzania a positive image.”

According to Mr. M. P. Besha, the acting Chairman of ATIG, the association seeks to bring together all Tanzanians resident in Ghana and promote their welfare, while also working towards strengthening the links between the two countries.

He called on all Tanzanians resident in Ghana to register as members and reaffirmed ATIG's determination to work towards the attainment of regional integration on all fronts.

ATIG aims at being the primary source and distributor of information relating to Tanzania; promoting mutual understanding among members of the association and working together for the advancement of Tanzanians; supporting and projecting a positive image of the country and its cultural values as well as collaborating with like-minded associations and agencies worldwide.

Tanzania's growth is propelled by agriculture, manufacturing, tourism, mining and infrastructure. The forecast for the economy for this year is a real Gross Domestic Product growth rate of 6.9 per cent and 7.3 per cent next year.

The United Republic of Tanzania is part of the East African Community which comprises the Republics of Burundi, Kenya, Rwanda and Uganda, and together has a population of approximately 132 million.