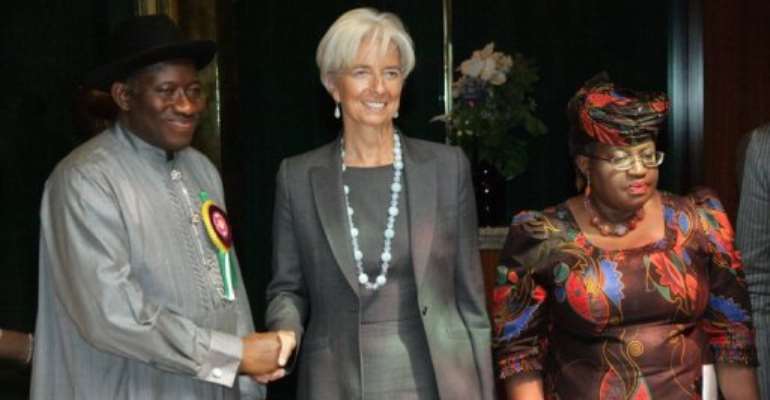 ABUJA (AFP) - IMF chief Christine Lagarde met Nigeria's president Monday on her first visit to Africa as head of the fund, with the trip to focus partly on potential fallout from the European debt crisis.

The International Monetary Fund managing director said she was impressed with economic reform plans being pursued by the government in Nigeria, Africa's largest oil producer and the continent's most populous nation.

"My mission is to come and listen and appreciate and understand exactly what economy programme will be implemented in Nigeria, and the initiative and the leadership of President Goodluck Jonathan," she told journalists after the meeting.

"I was extremely impressed with ... the energy and pace at which he wants to transform the economy, create jobs, focus on agriculture ..."

Lagarde is expected in the economic capital Lagos on Tuesday for a forum on Africa's future before moving on to the neighbouring nation of Niger.

She is also expected to visit South Africa in the coming weeks, but details are to be released later, an IMF official said.

Nigeria has long been held back by corruption and mismanagement despite its vast oil wealth.

Most of its population lives on less than $2 per day and electricity blackouts occur daily, while the country's mainly Muslim north has been hit by scores of deadly attacks attributed to Islamist group Boko Haram.

The government is seeking to enact reforms, including a deeply controversial measure which would lead to an increase in petrol prices, that would allow the country to invest more in its badly neglected infrastructure.

Lagarde's trip is expected to focus on issues such as addressing youth unemployment in Africa, the world's fastest-growing continent, as well as potential fallout from the European debt crisis.

Many African nations rely heavily upon European investment and trade.