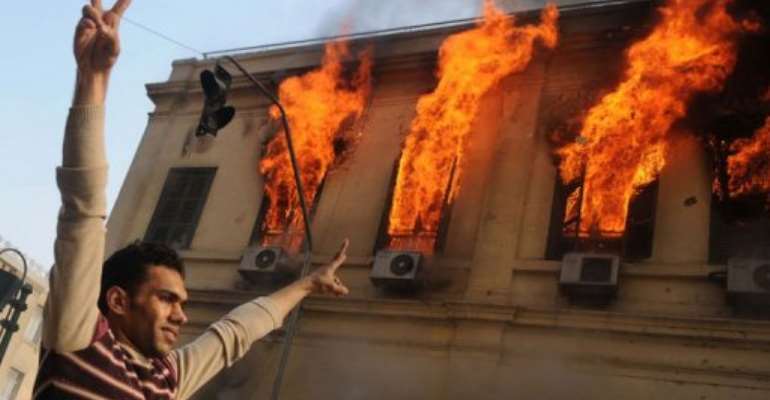 CAIRO (AFP) - Violence raged in the administrative heart of Egypt's capital on Saturday as troops and police deployed in force after clashes with protesters against continued military rule left 10 people dead.

Demonstrators pelted security forces with rocks and petrol bombs as they fought running battles in the streets around the square and an adjacent bridge across the River Nile.

Prime Minister Kamal al-Ganzuri raised tensions by accusing the protesters of being counter-revolutionaries and denying security forces had opened fire as they broke up a sit-in against his nomination last month outside the cabinet office.

Troops and police moved to retake control of the area around the office early on Saturday, erecting razor-wire barriers.

But after several hours of calm, new clashes erupted, overshadowing the count in the second phase of the first general election since Mubarak's ouster.

By midnight soldiers had withdrawn behind a concrete wall hastily erected in the afternoon on a street leading to the cabinet offices.

Protesters threw petrol bombs and stones over the wall. Barrages of rocks and fireworks were aimed at the protesters from a building on the other side of the wall.

Seventeen people arrested over the unrest were remanded in custody for four days.

On Saturday, 11 members of a civilian council set up in November to advise the military after anti-army demonstrations, resigned in protest at the casualties, the vice president of the 30-member body said.

"We made recommendations yesterday (Friday) but today we were surprised that not only were they not implemented, but there were further casualties," said Abul Ela Madi, who also heads the moderate Islamist Wasat party.

The military council later posted footage on its Facebook page and Youtube of protesters ransacking a government office on Friday, with a brief message asking: "Is it not our right to protect the people's property?"

The footage was the latest in a media war with activists, who circulated on Twitter a picture of soldiers beating a women on the ground whose shirt had been ripped off, and other soldiers making obscene gestures at protesters.

Friday's fighting, which raged from dawn well into the night, was the bloodiest since five days of protests in November killed more than 40 people just before the first round of the phased parliamentary election.

The health ministry said 10 people were killed in the violence, in a statement published by MENA on Saturday night.

Footage posted on YouTube showed the bloodied cleric lying on the street before protesters carried him away.

"The people demand the execution of the field marshal," the demonstrators chanted in reference to Hussein Tantawi, head of the Supreme Council of the Armed Forces (SCAF), which took over following Mubarak's ouster.

State television reported that Tantawi, in a gesture apparently aimed at mollifying protesters, ordered that wounded civilians be treated at military hospitals which are better equipped.

Pictures of a military policeman grabbing a woman by her hair and of another looming over a sobbing elderly lady with his truncheon quickly circulated on social networking site Twitter, enraging activists.

But at a news conference on Saturday, Ganzuri accused the protesters of being counter-revolutionaries and denied that security forces had opened fire.

"Those who are in Tahrir Square are not the youth of the revolution," he said.

"This is not a revolution, but a counter-revolution," added Ganzuri, who also served as premier under Mubarak.

He said 18 people had been wounded by gunfire on Friday and, without elaborating, blamed "infiltrators" who he said "do not want the best for Egypt."

It was the SCAF's nomination of Ganzuri as premier on November 27 that prompted the protesters to launch their sit-in outside the cabinet offices. They continued it after his interim government was sworn in on December 7.

France on Saturday denounced the use of force against protesters.

"France is worried about the violent incidents that have taken place on Tahrir Square in Cairo," a foreign ministry statement said, adding that Paris "denounces the violence and excessive use of force against protesters."

The military has said it will step down only once a president has been elected by the end of June in the final stage of a protracted transition.

As in the first phase last month, Islamist parties had a commanding lead over the liberals in the second stage, according to initial results cited by state media.

The Muslim Brotherhood's Freedom and Justice Party condemned "the assault on protesters and the attempt to disperse them."

Mahama Lauds Rawlings For Opening Overseas Areas To The Worl...
1 hour ago