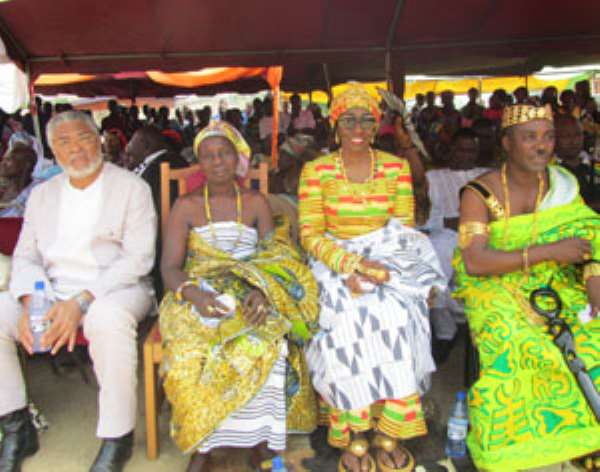 NANA KONADU Agyeman-Rawlings, wife of former President Jerry John Rawlings, was yesterday installed the 'Nkosouhemaa' of Dokrochiwa in the Akyem Abuakwa Traditional Area of the Eastern Region by the chiefs and people of the town, where the NDC founder blasted President Mills's appointees for scrambling for money.

Though Mr Rawlings, who accompanied his wife as the special guest of honour, said the occasion was a special one and would therefore restrain himself from making any political statement to mar it, he made a damning remark about the Mills administration for chasing cash in place of development.

'This a special occasion and I want the press to give publicity to the essence of it and not any rhetorics,' he said.

He claimed that the New Patriotic Party (NPP), which took over from him, demonized his wife's 31 st December Women's Movement (DWM) and its achievements.

He however said that his own party, led by Prof Atta Mills, which took over from the NPP three years ago, had even done worse things to his wife and him as the founder of the party.

'I thought we would change the way of doing things after taking over power again, but things have rather deteriorated. Government officials are chasing money at the expense of the country's development,' he said, adding that the Prof Mills-led NDC should quicken development and not allow love for money to destroy the nation.

The chieftaincy honour conferred on Nana Konadu, according to the chiefs, was in recognition of her contribution to the development of the traditional area and the country as a whole.

Nana Konadu, who was splendidly dressed as Nkusuohemaa, was given a 'red-carpet' welcome to the small town in the Suhum-Kraboa-Coaltar district.

The colourful ceremony was attended by all the chiefs in the Kraboa-Coaltar traditional area, some members of the ruling National Democratic Congress (NDC), members of the 31 st December Women Movement, while the Okyenhene, Osagyefuo Amoatia Ofori Panin, was represented by Nana Bafour Ansah, the Krontihene of Anum Apapam.

The chief of Dokrochiwa, Nana Bafour Anom II, in his welcome address, said the honour done Nana Konadu Opambuor was in recognition of her immense contribution to the development of the country, especially in the area of education, stressing that her installation would be used as a foundation to set up an educational fund to help promote education in the area.

'We all know the contribution made by the former First Lady towards our societal growth through her 31 st December Women's Movement (DWM) and we believe she would be a good ambassador for our town as well as a role model for the youth in this area,' he said.

According to the chief, the educational fund would be known as 'Nana Konadu Agyemang Rawlings Opambour Educational Fund'.

Accepting the honour, Nana Konadu Opambour said she was extremely glad to be given such recognition by the people of Dokrochiwa, adding that the recognition, though unexpected, was in the right direction.

'Since I became the First Lady, I made a pledge to myself to promote education in the country and through the 31 st December Women's Movement, a number of daycare centres were established throughout the country.'

According to her, she was recently invited to give a lecture at the Kwame Nkrumah University of Science and Technology (KNUST) in Kumasi and after the lecture, a female student stared emotionally at her. When Nana Konadu asked the student why she was looking at her, the student replied that when she was five years old and was attending the 31 st DWM Daycare Centre at Nima, she was the one who presented a bouquet of flowers to her when she (Konadu Agyemang Rawlings) visited the centre during one of her working tours of DWM Daycare Centres and that occasion motivated her to move to the highest level of education.

Nana Konadu also said that two years ago, she was invited to speak in two New York universities and during her interaction with the students, two students, one from Chorkor in Accra and the other from Hwehwe, were in those universities and confided in her that a special scholarship she provided enabled them to reach that level.

'I am very passionate about education and through my husband and me, a lot of Ghanaian youth have gotten the best of education and are contributing their quota to the development of the nation,' she said.

She said she would continue to work in the area of education even as an ex-First Lady.