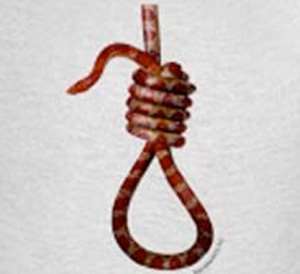 SOPHIA BOATEMAA, an 18-year-old girl resident at Ankaase, a village near New Edubiase in the Adansi South District of Ashanti Region, has hanged herself after a heart-breaking experience with her 19-year-old unemployed boyfriend in the area.

The teenage girl, who felt cheated after she found Augustine Nti, her lover of five years, with another girl in a room,  on Saturday, allegedly committed suicide by hanging herself with a  piece of sponge on a nearby cocoa farm.

Kingsly Owusu, an officer of the Forestry Commission at New Edubiase, found the body of Sophia Boatenmaa dangling on a cocoa tree in the bush close to the community, DSP Ebenezer Bentsil, New Edubiase District Police Commander said.

According to the police officer, Mr. Owusu, who initially had difficulty grasping what had happened, first informed the 'Odikro' of the village before he later reported the incident to the police.

DSP Bentsil stated that the police did not suspect any foul play as there were no scratches or marks of assault on the deceased's body when it was discovered.

He told DAILY GUIDE that Boatemaa's body had since been sent to the New Edubiase Government Hospital awaiting autopsy, while investigations continued.

The deceased visited her boyfriend on Thursday December 8, 2011 on the evening, after Nti got to the village from New Edubiase with the view to passing the night in her lover's room.

After spending some time with the boyfriend, the boy asked the girl to go back to her house since he would travel that night.

Sensing something fishy, the deceased, Sophia Boatemaa, left the room and returned an hour later only to find a new girl in the room with her boyfriend, the police boss narrated.

The Police Commander added that an exchange of words ensued between the two ladies, during which the new girl escaped from the room.

DSP Bentsil said the two lovebirds were left behind and got into a jolly mood shortly before Sophia's death two days later.

He explained that the 19-year-old boyfriend, on Saturday December 10, asked the deceased to represent him at a naming ceremony at the next village, while he headed to farm.

While on the farm, the police commander, said a co-tenant of Augustine Nti hurriedly came to inform him that his girlfriend had gone to a cocoa farm with a piece of sponge around her neck.

According to DSP Bentsil, Augustine organized a search party to look for the girl, but could not trace her until her body was discovered by the forestry officer later in the day on Sunday.

Some residents said they suspected that Sophia might have committed suicide because she felt her relationship was threatened.

'She was young, just 18 and in love with the boy. She believed that Augustine was her ticket to the good life she had dreamt of. May be she could not cope with the bleak prospect of his departure,' one of the residents said.