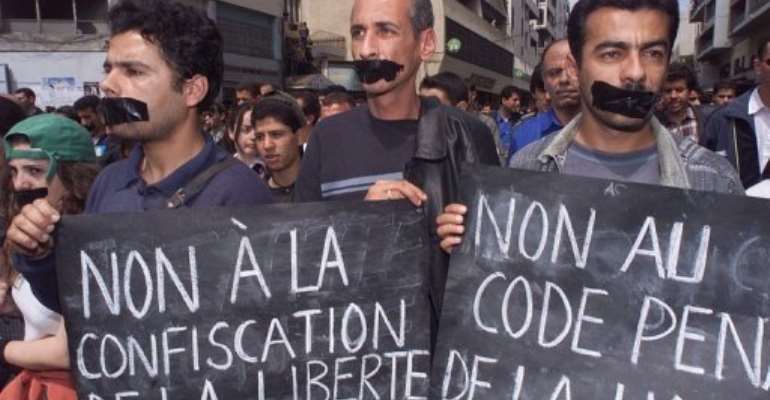 ALGIERS (AFP) - Algeria on Wednesday passed a media law that drew scorn from journalists, rights activists and opposition legislators who charged that it restricts freedom of expression.

The law promises press freedom but also lists 12 areas in which journalists must tread carefully to avoid undermining Algeria's national identity, sovereignty and security and the country's economic interests.

Opponents argue that the wording is ambiguous and gives too much latitude to judges who can decide to fine journalists up to 3,000 euros ($3,900) and jail them in case of non-payment.

The new law demands "a wide range of ideological allegiances, like respect for national sovereignty and economic interests -- expressions that are so vague that they hoist an intolerable sword of Damocles over the freedom of the press and expression," parliamentarian Ali Brahimi told AFP.

"Here we are closing the media," said Zoubida Kherbache, a member of the opposition Workers Party.

Mustapha Bouchachi, head of the Algerian League for the Defence of Human Rights, said the new law is a step backward from a previous bill that opponents had dubbed a "penal code" and worse than other media laws in the region.

"I find, unfortunately, that we in Algeria are a long way from the promise of moving toward openness and of letting people speak freely," he said. "This law encourages self-censorship."

Media workers voiced disappointment over the bill, which was among reforms promised by President Abdelaziz Bouteflika in April in response to a wave of popular protest that was part of the Arab Spring.

"A law should protect journalists and give them the means of accessing reliable information, not the opposite," said journalist Meriem Benchaouia.

Outside the assembly, members of the Initiative for the Dignity of Journalists staged a protest against the law and urged Bouteflika to review it in cooperation with the media industry.

The new bill includes 130 articles, among them a provision to open up television to the private sector. Algeria now has five TV and five national radio channels, as well as 47 local radios, all owned by the state.