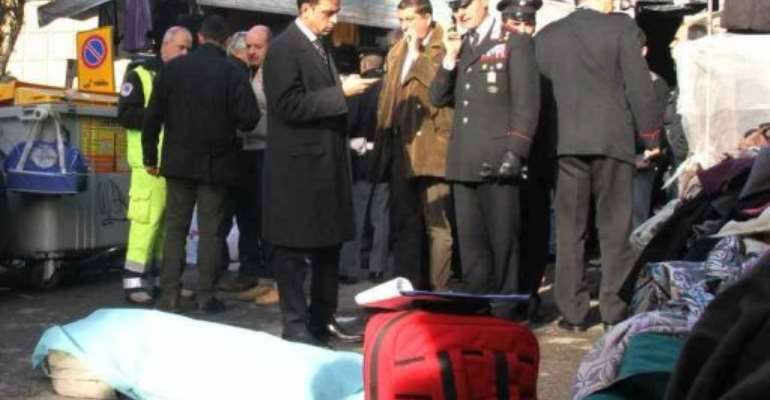 Witnesses at the market on Piazza Dalmazia said the gunman fired three shots. By (AFP)

ROME (AFP) - Florence was in mourning Wednesday after an Italian far-right author shot dead two Senegalese men and wounded three others before killing himself in a daylight shooting spree that prompted outpourings of grief.

Witnesses said they saw the gunman calmly getting out of a car at a street market on Piazza Dalmazia, north of the city centre, and firing three shots that instantly killed the two Senegalese vendors and seriously wounded a third.

The white assailant, identified by authorities as 50-year-old Gianluca Casseri, then moved on to the San Lorenzo market in the centre -- a popular destination for tourists -- where he wounded two more vendors.

Casseri then turned the gun -- a Magnum Smith & Wesson revolver according to news reports -- on himself after he was surrounded by police.

Around 200 Senegalese marched through the city in an angry protest after the shootings, shouting "Shame!" and "Racists!"

Hundreds of immigrants were later seen praying on their knees in tears in front of Florence's famous cathedral.

"The heart of Florence is crying today," Florence Mayor Matteo Renzi said in a Twitter message, declaring the city would hold a day of mourning Wednesday and would pay to repatriate the bodies to Senegal.

"I think the pain for the lives that have been cut short is not only for the Senegalese community but for all the citizens of our city," Renzi said.

International Cooperation and Integration Minister Andrea Riccardi and a Senegalese imam will attend a ceremony at Florence city hall on Wednesday.

"The Senegalese are good people, people who never get into trouble, who work every day," one Senegalese man told news channel SkyTG24.

Another man said: "These lads who were killed were only earning money for their wives, their fathers, their children."

Roccangelo Tritto, a spokesman for local Carabinieri police, told AFP that the man wounded at Piazza Dalmazia would live but remain paralysed for life.

The other two men were also in a serious condition -- one with a wound to the abdomen and another shot in the chest.

Casseri was the author of fantasy novels including "The Key of Chaos" about a wizard, a mathematician and an alchemist, which enjoyed some popularity.

He also wrote an academic paper about Dracula folklore and was the editor of a niche magazine about fantasy and horror fiction and comics.

Casseri lived on his own in the Tuscan countryside near Pistoia.

He was also a member of Casa Pound, a right-wing community group that is seen as more intellectual than other far-right organisations.

"He was a bit strange, a bit of a loner but he didn't seem crazy. He was living in his own world," said Fabio Barsanti, a regional coordinator for Casa Pound.

"He didn't seem capable of doing something like this," he said, adding: "We are against any type of violence. We consider the Senegalese humans like us."

Barsanti said Casseri was known locally mostly as a World War I buff.

While Casa Pound distanced itself from Casseri's actions, left-wingers were quick to pin the blame on a climate of racism in the country.

Walter Veltroni, a lawmaker from the centre-left Democratic Party, said the shootings were "a terrorist attack by a right-wing extremist".

"What happened in Florence is the product of a climate of intolerance against foreigners that has grown over the years," he said.

Nichi Vendola, leader of the Left, Ecology and Liberty party, condemned what he said was "a racist and fascist Italy that sows hatred".

At the scene of the first shooting in Piazza Dalmazia, witnesses quoted by Italian media said they were in shock and a newspaper seller said the gunman told him: "Get out of the way or I'll bump you off next."

"I heard the shots but I thought they were fireworks. Then I turned around and I saw three men on the ground in a pool of blood," one vendor said.

Another man said: "There are often Senegalese guys here who sell the usual stuff. They don't bother anyone and no one was expecting this."

African vendors can be seen on the streets of Italy's main cities selling sculptures, trinkets and fake designer handbags. They are often selling their wares illegally but are popular with tourists and local residents.

Give EC Benefit Of Doubt On 24-hour Results Promise – CDD-Gh...
19 minutes ago