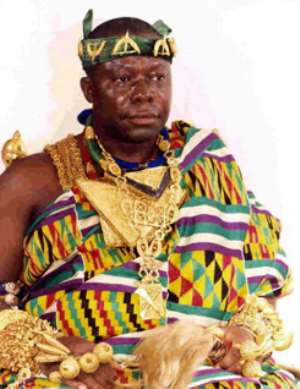 The factors that blew Gaddafi into extinction confirm the waywardness that he instigated through such ploys as the formation of this Forum to pursue the agenda that he set for it and his pompous display of a sham democratic spirit while suppressing his own people in Libya. He left this Forum in a doghouse and it must remain as such. It is not for the Asantehene to allow himself or the huge positive image of the Golden Stool to be misused for its revival.

If Otumfuo insists on serving on this Forum and allows himself to be deceived into becoming its “life time chairman,” he will live to regret. There is no success to achieve by leading this pack of chiefs and sultans who are more interested in pursuing interests that don't benefit their own people but themselves.

Now, to moral issues. Did these chiefs and sultans ever know of the atrocities that Gaddafi was committing against his own people before allowing him to “buy” them to be installed over them as the “King of Kings”?

Considering how Gaddafi was splashing his country's wealth about, one won't doubt it that he bought the conscience of these chiefs and sultans. Now corrupted, what moral rights do these chiefs have to want to call the shots? Or are they regrouping under the Asantehene to pursue anything that Gaddafi stashed away for the Forum?

These chiefs and sultans lack moral rights at other levels. Where were they when their leader (Gaddafi) was being hunted down for elimination? In the heat of the NATO military campaign, we didn't hear anything from them. They kept mute either because they had no balls between their thighs to make their voices heard against the impunity with which the West was brutalizing Gaddafi and his forces (the country, generally) or they did so to please their paymasters in the West.

Most of these chiefs have close ties with the political leadership in the West and feared biting the finger feeding them. How many of them don't visit the West, where they dine, wine, and wench with their former colonial masters? Believe it or not, these chiefs are appendages of the colonial network.

Now that Gaddafi is no more (having gallantly defended the principles on which he stood to resist the militaristic aggression from the West), these chiefs now know there is something called “United States of Africa” for which Gaddafi fought and will now seek to promote it.

They seem to be doing overtime to achieve nothing. What mechanism do they have to effect anything by way of that ideal of a United States of Africa? As a mere talk-shop, what power does this Forum have to influence anything of the sort on the continent?

This gang of wishful thinkers should find better things to do with all the time and resources at their disposal. But if they have nothing to do, they shouldn't do so on the continent!

At a time when the continent has continued to be in turmoil because of ineffective leadership and crass incompetence, one would expect better contributions than what these chiefs have up their sleeves.

Injustice to the queenmothers persists. Despite persistent calls for Queenmothers to be recognized and admitted into the Traditional, Regional, and National Houses of Chiefs—and for them to be elevated to responsible positions therein to contribute their quota toward national development—these male stool occupants have stood their grounds to relegate the women to the backwoods.

Even in areas that operate the matrilineal system of inheritance (empowering the queenmother to nominate the occupant of a vacant stool), the fate of queenmothers is deplorable when it comes to authority and sway over stool lands and resources. The chiefs exercise their chauvinistic qualms to exert their authority and exploit those resources.

The numerous chieftaincy disputes dotting almost all traditional areas in the country attest to the fact that the chiefs are not a unifying force to rely on. Neither do they indicate any change for the better in the near future.

Some chiefs are criminals whose sordid deeds have been exposed. This Togbui Fiti himself was reported about 5 years ago to have indulged in corruption (over the Aflao cement factory deals) and the matter received a wide coverage. Whether by accident or design, he seemed to have been let off the hook. There are many others like him whose records no one is proud of. Are these the people to lead Africa unite or become a United States of Africa?

In effect, by their own acts of commission or omission, our chiefs have given themselves and the institution of chieftaincy a bad name and virtually rendered themselves irrelevant in modern-day issues of governance.

The upsurge of chieftaincy-related ceremonies may deceive some to think that the institution still wields unfettered influence over the lives of the people. It's not so. Gradually but steadily, the institution and its adherents are falling behind the times and being overtaken by events that will soon prove to them that such a moribund institution and its occupants have no place in the modern scheme of governance.

The harm to the institution seems to be inflicted by those who use corrupt means to buy their way into the institution. Numerous cases of chieftaincy disputes have resulted from ineligible persons corrupting the kingmakers with their money and other material gifts to bulldoze their way through. In most cases, such ineligible characters hide behind their political connections to foment trouble. The ever-increasing tension that characterizes social relations in many parts of the country as a result of such crooked means to occupy stools portends an ominous end for it and its occupants.

There is no gainsaying the fact that some chiefs have used their good offices to advance the good cause of their people and should be commended for living above reproach. These good ones are few and far between, if truth be told. The misdeeds of many of them seem to overshadow the good that some do. By such misdeeds, the bad nuts continue to detract from the worth of the institution and cast chiefs in a bad light that no amount of politicking of the sort that the Forum is intended to do will change for the better.

I want to urge Otumfuo to be mindful of what he represents and not to rush into doing anything to smear his office or to provoke needless disdain for him. If he insists on pursuing the agenda that the tainted Gaddafi-induced Forum seeks to pursue, he shouldn't be angry when the sparks start flying toward him. And his supporters should know better not to attempt defending him if his wrong decision fetches him tons of bitter criticisms. We are poised to ensure that our chiefs don't go out of their way to do what is abhorrent. The agenda of this brainchild of Gaddafi is self-serving and must not be encouraged in any way. Gaddafi is gone and his shadow must follow him into the land beyond, not be allowed to lurk around for anybody to walk in.

The Asantehene should find a better means to do what will create goodwill for him, not take away what he has managed to cultivate by dint of hard work. His ceaseless efforts through the Otumfuo Education Fund alone are enough to generate that goodwill. He doesn't have to walk in the shadow of Gaddafi to add anything new to his status. Enough must be enough for him where he is now. We've always hailed him as the Asantehene and will not want to add the unenviable title of “King of Kings of Africa” to it.