Drama unfolds in court as cocaine turns into sodium bicarbonate 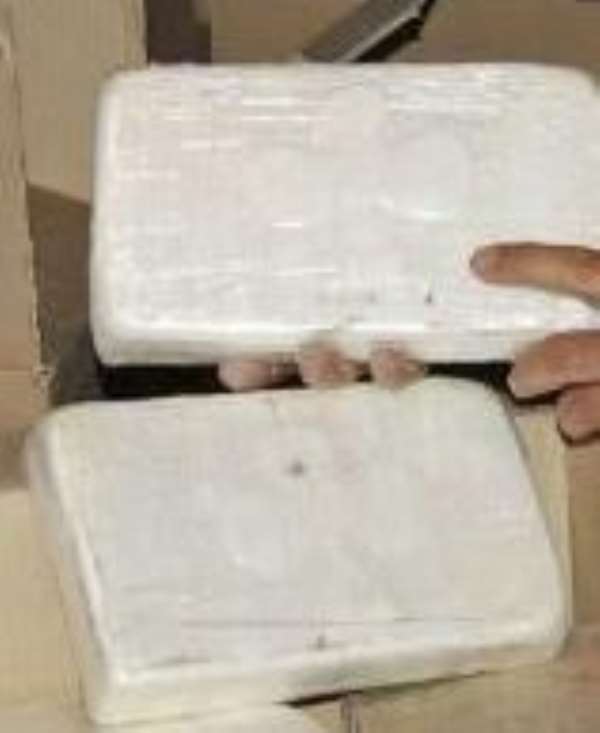 Accra, Dec. 13, GNA - Drama unfolded at a Circuit Court in Accra when it came to light that a slab of cocaine in the custody of the Police Headquarters has turned into Sodium Bicarbonate.

The court therefore charged the Inspector General of Police, Mr Paul Tawiah Quaye to institute a service enquiry to determine who might have tempered or changed a slab of cocaine found on Nana Ama Martin into Sodium Bicarbonate.

Acquitting Nana Ama over the drug charges, the court further ordered the IGP to prescribe the necessary sanctions in respect of the case.

On August 22, 2008, Nana Ama was arrested with a slab of substances suspected to be cocaine and when it was subjected to a chromatography test it proved positive of cocaine.

The substance had been in the custody of the Police for the past three years until when hearing commenced this year and the defence counsel insisted that the drugs should be re-tested at the Ghana Standards Board (GSB).

After the re-testing at GSB, the result tested negative saying the substance weighing 1,020 grams was Sodium Bicarbonate.

According to the court the GSB officer in the presence of Court's Registrar and the investigator Detective Thomas Ayekase conducted a test and the substance proved negative for cocaine.

“Curious to know the nature of the substance the GSB officer conducted further tests to know the exact nature and it proved to be a sodium bicarbonate,” the court recalled.

This aroused the court's curiosity, quizzing that “If the substance the prosecution produced before the court was what it tested to be cocaine at Police Forensic Laboratory, how come the same substance suddenly becomes sodium bicarbonate?”

According to the court, a government analyst who appeared before it confirmed that “There was no way the substance could suddenly take a different nature unless the substance had been changed.”

Nana Ama was charged with possession of narcotic substance without lawful authority namely cocaine, and had pleaded not guilty.

Touching on the case, the court presided over by Mr Eric Kyei- Baffour said he was unable to appreciate the position that an accused that had been charged with possession of cocaine had turned to be sodium bicarbonate.

“For this trial the light of prosecution that shone brightly has suddenly dimmed in the noon day trial. I only have to take the invidious option to abort the trial, to acquit and discharge the accused,"the court ruled.

It said there was no way it could have behaved like the proverbial “simpa payin” by giving its blessing for whatever substance brought before it and take it for granted that it was cocaine.

The court said it found as mind boggling the desperation by the prosecution to blame everybody for the substance not being cocaine.

“After all if prosecution genuinely believes that the substance tendered was cocaine what was the cause for such an explicable apprehension as the nature of the drug can never be changed, “the trial judge noted.

On August 22, 2008, Lance Corporal Prince Bonsu in the company of three other officers reported for duty and left for enquiries at Roman Ridge.

At Ridge they had a tip off that occupants of a taxi ahead of them were dealing in narcotics.

They therefore drove past the taxi cab and ordered to it to stop. They arrested the occupants of which Nana Ama was one of them.

The Police officers flanked Nana Ama but her accomplice who was in the front seat escaped.

The officers managed to bring Nana Ama to the Police Headquarters and it was discovered that Nana Ama had two bags.

One of the bags (that is the same one) contained a slab which was suspected to be cocaine.

During the trial, accused's statement was tendered and a report on the substance which proved positive of cocaine at the Police forensic laboratory.