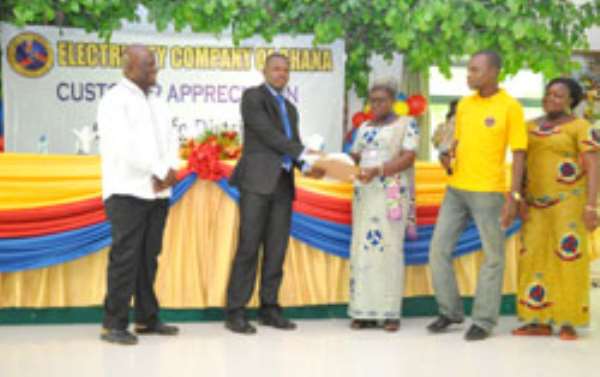 THE SOGAKOPE branch of the Electricity Company of Ghana (ECG) has rewarded its loyal customers for prompt payment of bills, as part of a maiden nationwide award scheme to encourage customers to maintain their loyalty to the company.

Five loyal customers, who made the most prompt payments in the district in order of merit, included the Holy Trinity Spa, and Dr. and Mrs. Agbenorku, who were said to sometimes make advance payments and also pay for others, found it difficult to pay their bills.

The others who were awarded at the brief ceremony that took place at the Holy Trinity Spa on Friday included the Red Bull company, a corn miller, Atipoe Lumor and Mr. Worlali Dekutse for domestic use.

Besides these awardees, there were many other customers in attendance, including officials of the Agricultural Development Bank, who were all rewarded with some ECG souvenirs.

The ECG District Manager of Sogakope, in the Volta Region, Mrs. Christine Mawusi Hadzi, said the newly introduced awards system to reward loyal customers, particularly those who paid their bills promptly, targeted customers of all categories to thank them for patronizing ECG services.

She stated that the ECG, like every business, relies on customers for success and 'telling them how much they are valued is paramount, to building a healthy relationship.'

According to her, the customer appreciation week was specifically to demonstrate to customers how much they were appreciated, which is more powerful than merely saying it, noting 'every customer loves to be appreciated and complemented.'

When customers feel appreciated, they voluntarily reciprocate this gesture through favoring the company and become more sympathetic to the shortfall and challenges faced by the company, she added.

'We want to tell you that the Electricity Company of Ghana and especially the Sogakope branch can be trusted because we are passionate our customers, especially those who pay their bills promptly but you are all on our heart', she emphasized.

She pointed out that challenges facing the district included low consumption such as the use of bulbs that reduced billing, and non-payment by people who acquired electricity through projects and don't feel obliged to pay bills.

Mrs. Hadzi said generally, payment of bills was low and delayed, hence the award would encourage customers to be more positive about payment of bills, adding that though only a few customers were rewarded for the first time, the district would mobilize funds to reward many more loyal customers subsequently.

The Executive Chairman of the Holy Trinity Group of Companies, Dr. Felix Anyah, thanked the ECG for appreciating their contribution to the company and showing its customers how much they value them.

Election 2020: You'll have ‘fugitive’ president should Maham...
57 minutes ago