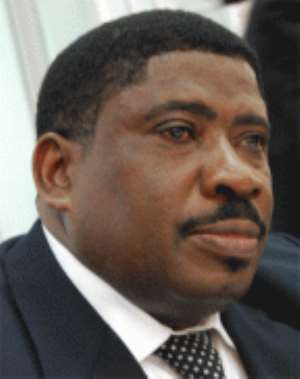 The Customs Division of Ghana Revenue Authority (GRA) collected GH¢3,249.41 million from January to November this year, exceeding its target by 18.05 per cent.

In the case of the petroleum sector, revenue collection amounted to GH¢386.63 million, compared to GH¢302.34 million sector target.

A statement issued by the Commissioner of the Customs Division, Major-General Carl Mordey, in Accra, said a detailed comparison of the 2011 revenue performance showed a 50.21 per cent increase in duty collection over the 2010 collection for the period January to November.

Concerning the Value Added Tax (VAT), there was a 49 per cent increase, while for the National Health Insurance Levy, the increase was 48.87 per cent over that for the same period last year.

According to the statement, imports grew by 49.87 per cent, while petroleum revenues grew by 56.99 per cent, with overall growth in all sectors recording a 50.68 per cent increase over the 2010 performance.

It explained that factors which impacted on improvement in tax base (CIF) included increased imports arising from higher investment volumes in the economy.

“The improved valuation system upon the introduction of the Valuation Assurance Module has reduced traders’ ability to suppress final classification valuation report (FCVR),’’ the statement said.

Following a review of the permit system, whereby goods of perishable nature could be processed and cleared with permits pending the payment of duty, traders might now deposit 100 per cent of the potential duty payable before enjoying the permit facility, it added.

That measure, it explained, had also resulted in improved rates of perfection of permits, while leakage at bonded warehouses had reduced drastically.

It said regarding the petroleum product revenue, the main factor impacting the rise in performance was the improved monitoring of volumes of products lifted at the various Bulk Oil Storage and Transport (BOST) facilities across the country.

The division said it intended to sustain revenue growth by further streamlining the issuance and usage of FCVR, adding that the use of the permit system would be restricted and the monitoring of permits perfection would be scrupulously enhanced.

“The examination of goods will be subjected to stricter supervision and maximum compliance, while ensuring faster clearance of goods, particularly by compliant importers.

“Customs intends to introduce wider coverage of automation, including the electronic submission of all permits and authorisations, as well as the electronic attachment of trade documents to GCMS.

“Furthermore, Customs will introduce a new transit tracking module to track and account for containers and consignments,” the statement said.

Regarding professional service delivery, the statement said ,a segregated and focused training for staff in compliance and examination of goods had started.

Meanwhile, it said, a change management module had started with the nation-wide sensitisation of staff to responsibilities and the development of a strong organisational culture of integrity and commitment to constantly improve work output.

The division assured the public that it did not and would not condone fraudulent activities.

“Recent media allegations in respect of the importation of chicken backs are being investigated by the Customs Division and other security and investigation arms of state,” it said.

That, it said, was complimented by an intensified scanning regime, as well as premises inspection of such perishable commodities by Customs officials and other port agencies.

The statement gave an assurance that the outcome of the investigations would be made public and accordingly urged the public and the media to assist Customs with information on perceived acts of corruption for further action.