Ministry Will Help GIJ To Grow 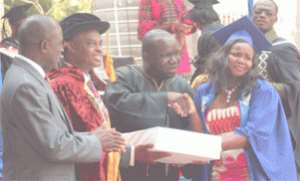 The Ministry of Education and the National Council for Tertiary Education (NCTE) have pledged their support to the Ghana Institute of Journalism (GIJ) to help it improve on its systems and procedures and ensure that it competes favourably with other public universities.

The Minister of Education, Mrs Betty Mould-Iddrisu, announced this in a speech read on her behalf at the fifth graduation of the GIJ in Accra.

She lauded the efforts of the institute in playing a vital role in building a solid manpower base for the nation and Africa as a whole.

“The strides being made under our democracy would not be complete without the products for this institute, for they have been part of the construction and development of the nation,” she said.

She urged the graduands to use their qualification to focus on more everyday issues that would help make a difference in their environment.

Speaking on the theme, “Developing Human Capital for Information Management in Ghana: A Challenge to Communication Training Institutions”, the Chairman of the National Media Commission (NMC), Ambassador Kabral Blay-Amihere, said universities, schools and colleges, by their mandate, must produce functional citizens and not certified ones.

He added that in today’s media and expanding age, training institutions such as the GIJ must re-examine their curricula and the impact of their products on society.

Mr Blay-Amihere added that the challenge facing communication training institutions was to have both the financial and human resource to create the best of conditions for the training of future communication workers.

“It is in this regard that the various communication training schools must re-examine their curricula to ensure the right balance between skills development and intellectual path,” he said.

He called on media institutions and organisations to ensure peaceful elections next year and also join in efforts at ensuring that the media lived up to expectation through public seminars and lectures.

The Rector of the GIJ, Mr David Newton, in his address, said the institute’s affiliation with the University of Ghana would officially come to an end in 2012, adding that in 2013 the institute would, for the first time, award its own degree certificates as a result of the Presidential Charter it received in 2009.

He also announced the establishment of the Faculty of Communications and Social Sciences as the third faculty, in addition to those of Journalism and Public Relations.

Mr Newton said the institute was making progress in the utilisation of Information and Communications Technology (ICT) in the implementation of academic programmes.

He said in order to achieve those objectives, investment activities for next year would focus on strengthening ICT systems and the procurement of additional computers, audio visual materials, books and other materials for the library.

A total of 135 students, consisting of 98 women and 37 men, graduated with Diploma in Communication Studies and those who showed exceptional performance in their studies were rewarded for their efforts.