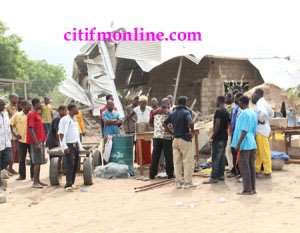 About 100 more houses were on Monday demolished bringing the number to 600 by a combined police and military team at Joma, a fishing community near the Weija river in the Ga West Municipality of the Greater Accra region.

The exercise which began on Saturday, December 10 has so far rendered about 2,000 residents including a five-day-old born twins homeless.

The Ga Municipal Assembly has planted a military/police platoon to deal with whoever will attempt to resist the exercise.

Speaking angrily to Citi News at his palace, Nii Ayitey Noyaatse I, the Joma chief accused the city authorities of undermining his authority.

According to him, his palace was not informed ahead of the demolishing exercise.

Nii Noyaatse I decried the manner in which the structures including the community church and the Joma Presby Primary School block were demolished.

'Government is telling us not to go to church and that our children should not go to school because our church and the only school building we have here have been demolished,' he complained.

http://www.dailyguideghana.com/wp-content/uploads/2011/12/demolished_2.jpg Madam Jacqueline, a teacher of the demolished Joma Presby Primary School told Citi News the children were preparing to write their examinations when the exercise was executed.

She stressed that the government had denied the children their right to education.

The secretary to the Joma community, Joseph Alobuia, took a swipe at government and demanded answers from the city authorities for carrying out the exercise without notifying them.

The victims vowed never to participate in the upcoming 2012 general elections because they felt treated like aliens on their homeland.

They wondered how government could subject its own citizens to such inhumane practice whereas refugee camps have been established to provide shelter for the Ivorian and Liberian refugee residents in Ghana.