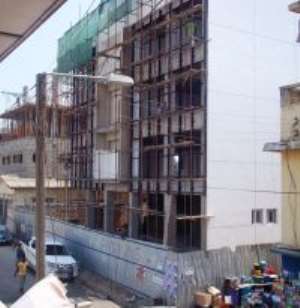 Information available to the New Statesman indicates that the ruling National Democratic Congress will this week find and announce the “owner” of the '$20 million NDC headquarters', a property whose ownership has been the subject of denial and acceptance by the party.

Intelligence reports gathered by the paper was that Alfred Woyome was to be named as the owner of the building but the party decided against this course of action in light of the baggage Mr Woyome is carrying, the latest being the whopping $41 million judgement debt ruled in his favour.

The idea behind this move by the NDC was to mimic Hackman Owusu Agyemang's donation and subsequent rental of a club house to the New Patriotic Party in 2008, at a time when he wanted to become the NPP's 2008 presidential candidate. The NPP last year, through contributions from its MP's acquired its own club house.

Interestingly, the civil engineer for this building project is Kojo Twum Boafo, whilst Steve Akufo, an NDC guru, doubles as the consultant who supervises the day-to-day construction of the building.

Many residents, onlookers and vendors around this edifice told the New Statesman of sightings they've had of the NDC party apparatchiks frequenting the building site.

“One of the Ahwoi's, the one with silver hair and who limps as well has been coming here to oversee this building project. Alban Bagbin also comes here a lot,” Kwame a mobile phone units vendor told the paper.

Why the NDC decided to engage the Chinese in building this property, whereas there are equally capable construction firms to carry out this job and also provide jobs for Ghanaians has also been questioned.

Inside sources within the NDC, which the paper cannot independently verify, tell the paper that the construction work is allegedly a kickback gotten from the Chinese as a result of the NDC's growing relationship with the Chinese.

Also, about 90% of the contracts for infrastructural development, the source says, have been carried out by foreign owned companies. Out of this number, 86% of these contracts are being carried out by the Chinese. The latest Chinese foray into Ghana is the construction of Ghana's first gas being undertaken by Sinopec, a Chinese company.

For a party that is very fast in churning out propaganda, the details about the ownership of this building has been met with varied responses from the NDC ranging from denials, counter denials and acceptance ownership.

It is recalled that the General Secretary of the NDC, Johnson Asideu Nketsiah, at this year's Sunyani Congress stated categorically that a new office complex to serve as headquarters for the party was nearing completion. He also stated that the party had acquired land at Oyibi to build a leadership training institute for the party.

Yaw Boateng Gyan, national organiser of the party has stated that he is unaware that such a project [building of national headquarters] was going on.