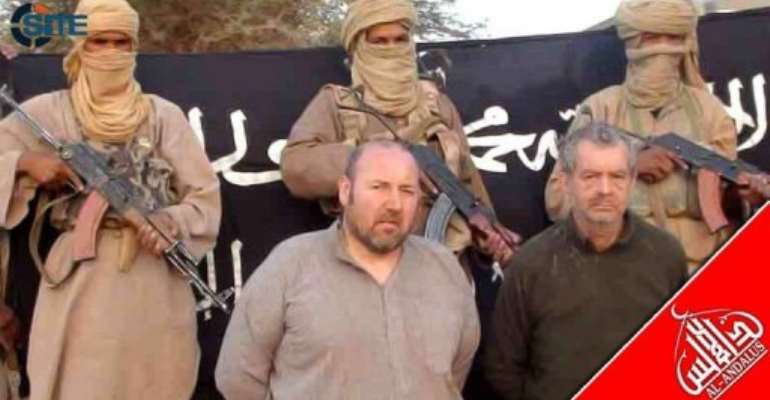 WASHINGTON (AFP) - A statement from a group identifying itself as Al-Qaeda in the Islamic Magreb has claimed responsibility for the kidnapping of five Europeans in Mali in two separate incidents, the SITE monitoring group said.

The message posted along with pictures of the victims on Jihadi forums identified two French nationals and "identified three others as Europeans but didn't indicate their nationality," said SITE in a statement.

Al-Qaeda in the Islamic Magreb (AQIM) said the kidnappings were a revenge act for the "repeated aggression" of France in the region and the "continuous foolish policies" of French President Nicolas Sarkozy.

They meanwhile denied involvement in the abduction of three Europeans in Algeria that was claimed on Saturday by an AQIM splinter group.

One photo showed French nationals Serge Lazarevic and Philippe Verdon with three armed men behind them, their faces obscured by turbans.

The other showed a Dutch national, a Swede and a man with dual British-South African nationality surrounded by four armed men, their faces similarly masked.

The group meanwhile in the statement denied kidnapping two Spanish nationals and an Italian from a refugee camp in Algeria in a separate incident that has been claimed by a group which said it had broken away from AQIM.

On Saturday, that off-shoot group -- calling itself the Jamat Tawhid Wal Jihad Fi Garbi Afriqqiya in west Africa -- claimed the October kidnapping in an audio and written message sent to AFP's correspondent in Bamako.

Security sources in the region have recently spoken of the formation of the breakaway group, which means "Unity Movement for Jihad in West Africa."

The kidnapping of tourists in the region, which began in 2003 when 32 German and Swiss travellers were seized in southern Algeria, has become big business for local people looking to sell a foreigner to AQIM for a quick windfall.

AQIM grew out of a movement launched in the late 1990s by radical Algerian Islamists who sought the overthrow of the Algerian government to be replaced with Islamic rule. The organisation linked to Al-Qaeda in 2006.

These militant Islamists have spun a tight network across tribes, clans, family and business lines that stretch across the Sahel.