Sekou Is Not Nkrumah's Son? 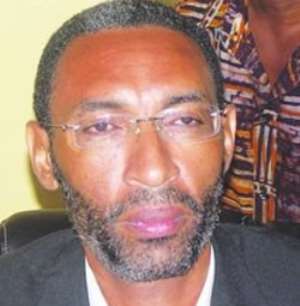 According to the President's men, there is no way such a "great man" could have given birth to such a "shallow mind." According to their theories and insinuations, Fathia, must have "suarezed" the Osagyefo with Sekou as the result.....all because Sekou dared to criticize President Mills and his government for their incompetence and ineptitude.

What the president and his men have failed to realized is that Sekou is exactly his father's son. That the father stood up to the whole world and told them straight in the face, what was wrong with the world then, just as the son is doing now in a similar vein and on a smaller scale to president Mills amidst the attempted bribery and intimidation and insults.

When Mills came to office, Sekou was appointed as the chairman of the National Youth Council. He obviously accepted the post with the same zeal as most independent appointees of Mills who had bought into the lies and fake promises. But like the rest of the country, Sekou was to found out in the very first months of the Mills administration that he had been taken for a ride. As he sought to ask questions as to the wanton corruption and paralysis of the president's governance, he was quickly given his termination papers. The humiliation and the insults would soon start afterwards. It'd culminate in Sekou being denied his usual seat on the podium during "Founder's Day" by Mills' men- the very day that had been set aside to honor his father.

We thought the President's men couldn't top the aforementioned humiliation. We were wrong. Now come the most vicious and malicious insinuations and insults of them all: that Sekou's very existence is due to his mother's indiscretions- simply because in their delusion, they believe Kwame Nkrumah himself would have been singing the president's praise had he been around.

Since President Mills came to office, his men, with his blessings, have sought to discredit, denigrate and demean any one who dares to criticize his administration. He who is not on board with them must be treated like the way the Nazis treated the Jews. Think tanks, civil societies, chiefs, Bishops, Imans have all been given a taste of the Castle's treatment; even the founder -and his wife -of the president 's party have not been spared. The ghost of Nkrumah himself has now been conjured up to face the nasty treatments of Mills and his men.

For someone whose father spent eight horrible years under the Preventive Detention Act (PDA) in Nsawam-24th February made it possible for me to come into this world some years later- and whose godfather was killed by the PNDC Chairman, I should have been cheering on Mills and his men, secretly- for making mince meat out of the Chairman and Nkrumah. But there comes a time in a man's life when one realizes that "some evils are more potent than others.". Certainly we live in "evil" times." And certainly I don't want my children to grow up in this "evil" culture where children have lost respect for their elders...thanks to John Evans Atta Mills.

So if I have to break bread with Nkrumah's son and the PNDC Chairman in order to uproot Mills and his men, I 'd gladly do so and without hesitation. For I know that if Kwame Nkrumah had been around, he would have also endorsed Nana Addo Dankwa Akufo-Addo, the nephew of his "arch nemesis", Dr. J.B Danquah...like his son has done.

Sekou, you are your father's son. Samia, the ball is now in your court. Kindly do the right thing.