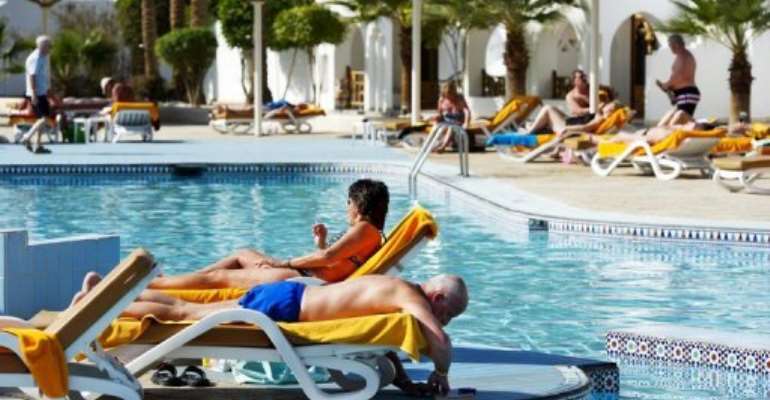 CAIRO (AFP) - The success of Islamist parties in Egypt's elections could aggravate an already serious economic crisis in the Arab world's most populous nation, analysts say.

Since an uprising in January and February that toppled the 30-year regime of Hosni Mubarak, attention has mostly focused on the political upheaval in a nation at the heart of the Arab Spring.

All the while, however, the economy has been on the slide, with violence scaring off vital holidaymakers and foreign investors choosing to place their money elsewhere.

The success of Islamist parties including hardline fundamentalists in the first stage of elections for a new parliament, which concluded last week, risks exacerbating both of these trends.

"The collapse of foreign currency reserves and the decline in tourism seriously complicates the economic situation," said Samer Suleiman, economics professor at the American University of Cairo.

"The large scores of Islamist parties in the first phase of elections will make investors nervous," he added.

The biggest winner in the election was the more moderate Muslim Brotherhood movement, which won 36.6 percent of party votes, while the ultra-conservative fundamentalist Al-Nur party picked up a surprisingly strong 24.4 percent.

Both are committed to instituting Islamic or sharia law, and have sent conflicting signals about their approach to the economy and the tourism sector.

Some of the more conservative elements speak about banning mixed-sex beaches, alcohol and even bikinis, while party leaders have sought to reassure that tourists would not be subjected to more restrictions.

For investors, who seek a stable environment for their businesses, the uncertainty is a major deterrent.

Mohsen Rechad, a tourist guide and owner of a small hotel in Cairo, is worried, citing comments made from some followers of the strict Salafi brand of Islam that would scare off his customers.

"This Islamist wave will have a negative impact on the tourism industry, especially if they decide to legislate against alcohol or certain clothes, especially on the coast," he said.

About 15 million tourists visited Egypt last year, bringing vital foreign currency to the country and supporting businesses in the tourist hots pots of Cairo and the Red Sea coast.

About 1,000 employees in the sector demonstrated last Friday to draw attention to their difficulties and the anti-tourist declarations of some Islamists.

As holidaymakers head elsewhere, foreign reserves in Egypt have fallen from $36 billion at the beginning of the year to $20 billion.

By February, they are projected to fall to $15 billion, a level at which it will become difficult to pay for imports such as wheat, analysts say.

Egypt is the world's biggest wheat importer, buying about 10 million tonnes a year on international markets.

The army, which has a host of business interests, announced on December 1 it had lent the central bank $1 billion from its own funds to help shore up its finances.

"The economic vulnerability of the country is immense," a Western diplomat told AFP on condition of anonymity. "The government faces complicated choices."

Prices of staple goods have also increased this year, with annual inflation clocked at 9.1 percent in November according to official figures published on Saturday.

The new government of 78-year-old Prime Minister Kamal al-Ganzuri, sworn in last week, has promised that tackling the country's economic problems will be one of its main priorities.

"The economy will remain weak under this new government because of the social and political uncertainty," says Alia Mamdouh, an economic analyst at Egyptian investment bank CI Capital.

She forecasts economic growth for the 2011/2012 financial year will be below 2.0 percent, less than the 3.2 percent predicted by the government and far from the rates of 5.0-7.0 percent of the latter years of the Mubarak regime.

The slower growth rate will reduce tax revenues, widening an already gaping budget deficit that could reach 10.6 percent of the country's Gross Domestic Product (GDP) instead of the 8.6 percent seen by the government, Mamdouh says.

Under the complicated and lengthy election process, a new parliament, constitution amd president will only be decided by the end of June next year at the earliest, meaning political uncertainty is set to persist.

The budget deficit and declining foreign reserves mean Egypt might once again need help from the International Monetary Fund, the lender of last resort to governments in need of financial assistance, analysts say.

An emergency loan of $3.2 billion was offered in June, but new Finance Minister Mumtaz al-Said has it is still "too early" to say if the government will take it.