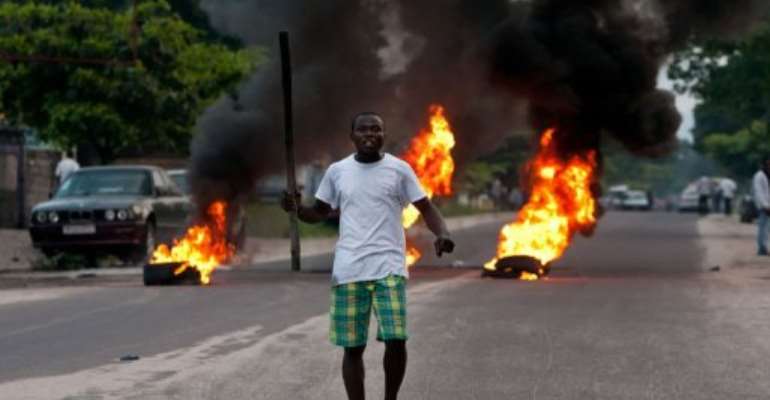 Violent protests and looting erupted in Kinshasa after Kabila was declared victorious. By Gwenn Dubourthoumieu (AFP)

KINSHASA (AFP) - The Democratic Republic of Congo's election standoff intensified on Sunday after a team of international observers reported that incumbent Joseph Kabila's win was so flawed it lacked credibility.

Kabila, in power since 2001, was on Friday named the winner of the November 28 poll, but runner-up Etienne Tshisekedi immediately rejected the result and declared himself president.

Violent protests and looting erupted in Kinshasa after the announcement. Police said four people had died in the unrest Friday and Saturday. UN broadcaster Radio Okapi said six had died.

Election monitors from the Carter Center, a non-profit organisation founded by former US president Jimmy Carter, added momentum on Saturday to Tshisekedi's refusal to accept the results, saying they "lack credibility".

"Multiple locations... reported impossibly high rates of 99 to 100 percent voter turnout with all, or nearly all, votes going to incumbent President Joseph Kabila," the group said in a statement.

"These and other observations point to mismanagement of the results process and compromise the integrity of the presidential election."

The Carter Center said its observers gave a rating of "poor" to 40 percent of the 169 compilation centres where results were tabulated.

It reported irregularities including the loss of nearly 2,000 polling station results in Kinshasa, a Tshisekedi stronghold, and chaos in the counting process ranging from ballots piled on the floor and stepped on to results sheets soaked in a rain storm then hung on sticks to dry.

"This assessment does not propose that the final order of candidates is necessarily different than announced by CENI, only that the results process is not credible," it said.

The European Union and other international and local observers have also cited serious problems with the vote, ranging from disorganisation at polling stations to ballot box stuffing.

The election commission said Kabila had won 49 percent of the vote to 32 percent for Tshisekedi.

Tshisekedi claimed his party's own count based on results taken directly from polling stations showed he had in fact won with 54 percent.

"As a result, I consider myself from this day on as the elected president," he said.

Government spokesman and Communications Minister Lambert Mende on Saturday threatened Tshisekedi with prosecution for the statement, which he called an "infraction of the law" and an "attack on the constitution".

Exacerbating the volatile atmosphere, national police chief Charles Bisengimana said security forces had fatally shot three looters and a woman had been killed by a stray bullet during unrest in the capital after Kabila's win was declared.

A heavy security force presence, including police, presidential guards and 20,000 soldiers on standby at military bases, put down the initial protests.

The city was sharply divided at the weekend. Kabila supporters held a second night of victory celebrations Saturday at party offices in the upscale neighbourhood of Gombe, where many embassies and ministries are located.

But in Bambu district, a Tshisekedi stronghold, police detained youths they accused of instigating violence, tied them up and hit them, firing their AK-47s in the air to clear the streets.

"The police are terrorising the population," said opposition activist Angele Makombo, president of the League of Congolese Democrats.

Analysts have warned that the elections, just the second since back-to-back wars from 1996 to 2003, risk unleashing new conflict in the vast central African country.

The campaign was marred by bloodshed that according to Human Rights Watch left at least 18 civilians dead, most shot by Kabila's presidential guard.