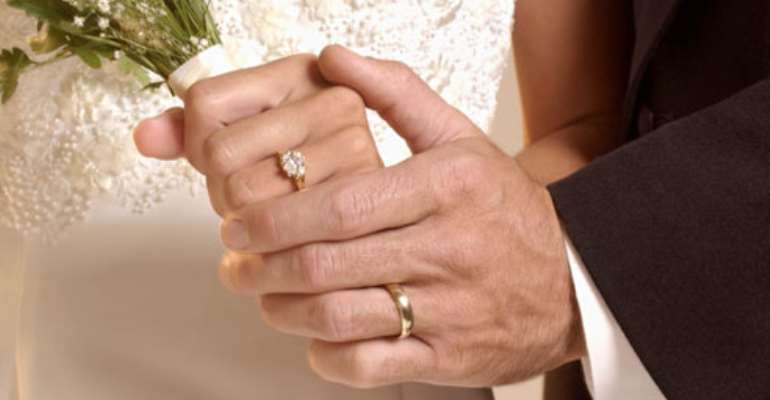 Somewhere in July of 2011, playwright Uncle Ebo Whyte declared on Joy FM's Super Morning Show, that not everybody has the right to marry or deserves to be married. His point was that some people do not put any premium on the sanctity of the noble institution. They are also those who rush into marriage without understanding the full implications of the covenant that binds a couple. Those bad examples make the beautiful institution of marriage look funnier than one night stand in the open.

The New Mexico state in the United States of America has decided to take Whyte's position a little further by considering a legislation to codify it into law. When passed, New Mexicans would be required to obtain a license to try marriage for only two years, after which they would be deemed eligible to renew the agreement and marry properly–if they survive the testing period without any incident. The reason is to curb the high divorce rate in the state and also save couples lengthy divorce settlement proceedings. More than half of marriages contracted in New Mexico end in divorce, wrecking families and rendering children more vulnerable to social problems.

There have been mixed reactions to the trial marriage bill from various people around the world, with the Christian lobby lambasting the legislation's disregard for marriage as a sacred institution ordained by God. Others, however, believe that the measure would check divorce, by preparing people to understand the demands of marriage before making a mess of it all. Lizbeth Rosas, the state official spearheading the project, says: “If you renew, that means you have an understanding with your partner, and that you are clear on the rules of the relationship.”

That is how disposable modern marriages have become. A cell phone contract agreement with a telephone service provider sometimes lasts for three years. There are clauses of penalty fees and other inducements to commit subscribers to stay longer with the network. These contracts do not state expiry dates; instead they give so much room for renewal. I am in the twilight of my three-year cell phone contract with Rogers communications. The network has already contacted me several times to stay with them, promising better services. In New Mexico where marriages are to be given expiry dates of two years, my Rogers contract would not pass. Some credit card agreements even go beyond three years. But modernity considers two years more than enough to test love, loyalty and compatibility.

Experts say that divorce rates are very high among people who lived together before tying the knot. That makes the Christian prescription of abstinence quite sensible. Even so, some evangelical Christians have wondered how far couples should know each other during the dating period before entering into marriage. Sex before marriage is a definite no-no for Christians. However, kissing before marriage is not a no-no. Yet, the assumption is that the couple may have never kissed when the officiating minister proclaims “Now you may kiss the bride.” Most ministers do not know how couples fool all of us when they plant their supposed first kiss.

The CNN's John Blake recently wrote that most Christian singles surveyed have resolved not to wait any longer. They don't find the prescription of abstinence practical. With Christians themselves making a mockery of God's own beloved institution by sexing away, while their Bishops and popular mega preachers are daily embroiled in one sex scandal or another, one wonders whether there is any respect left for today's quicky marriages.

I haven't been married long enough, so I would not presume that I know better than the guy who remarried just yesterday. Even as a novice who holds a virginal idea of the institution, I find the whole experience so beautiful that I lose myself daily in the sheer wonder of the joy that it brings.

I didn't have to go on one knee when I proposed marriage to Linda, because I had been on my knees for the better part of a decade, during what looked like a thrilling treasure hunt. So, when she said yes, I saw myself momentarily transmogrify into a whole bundle of joy. And when she hugged and kissed me, it was like a spring that had been wound up tight; it would uncoil of itself. There, it dawned on the two of us that we had fallen on the radar of Open Heaven, where favour would forever remain our portion.

Lots of friends, some very well placed, and other well wishers attended our ceremony. They brought us gifts, ate and prayed with us. We gave them the impression that we understood the demands of the undertaking…till death do us part. There was no mention of the word divorce. Neither was there a list of conditions under which divorce could be contemplated. There, it also dawned on me that we would have fooled all the guests, and rendered their well wishes and gifts worthless, if we made a joke of the business. If we ever decided to end our marriage, we should be made to invite all the guests back to the same venue we pronounced the 'Till Death Do Us Part' vow, and explain to them why we wasted their time when we knew we couldn't honour our vows. We should also be made to return all their gifts and pay for the fuel in their car. That would not even be enough restitution.

If marriage went with these conditions, there would probably be very few divorces. There are many reasons why divorce rates have skyrocketed today. The most popular one, especially among celebrities, is 'irreconcilable differences.' Do people pretend there were not different parties when they came together? No matter how long the dating period lasts, you don't get to know your partner overnight after saying 'I DO'. It is a process that needs working on and reworking to make it work. You discover new things about your partner's reactions to different situations. Irreconcilable differences are the very things that marriage works out. And though one in spirit, you remain different persons in one. The two of you are not fused into one body; there would be differences–that must be worked on.

What New Mexico hasn't made clear is how many times a person can apply for the license. So after three two year tries, is the individual deemed not marriageable? What if they pass the test on the first attempt but lose the plot after the marriage has been renewed? That would have defeated the essence of the trial marriage law in New Mexico. Marriage is not a legal agreement; it is a spiritual covenant that is policed by God Himself, not law.

Perhaps, apart from Apostle Paul who ruled himself out, we all have the grace to marry and make it work. Judging by how plain and blunt Paul was, especially in his letter to the Galatians, Mrs Paul would have a lot to take in. On the other hand, some say Jesus Christ himself would have been a fantastic husband if he had married. He had all the qualities women look for: mansions in Heaven (not a mortgage), caring, compassionate, kind, merciful, prayerful, wise, rich in glory, and hardworking. Isaiah quotes Jesus as a man with normal male features. That means he didn't have particularly revealing or pronounced physical qualities. Perhaps that should tell us that marriage is not for those who are consumed by what the eye beholds; it is a serious exercise that requires maturity (not old age) to succeed.

Whatever happens with the New Mexico bill, marriage (Heterosexual marriage, I mean) remains a respectable institution that would endure. After all, research has shown that married people live longer than those who live the dreaded single life. Being happily divorced does not compare with being married (even if not happily). But if we must marry, we must marry up. If, however, you must marry down, be sure you don't mind going down.

Kwesi Tawiah-Benjamin is a journalist. He lives in Ottawa, Canada.