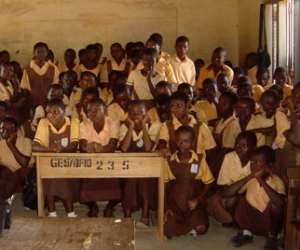 Koforidua, Dec.9, GNA - Children in the Eastern Region have called on government to bridge the education gap between pupils in the urban areas and those in the rural areas to ensure equal access to quality education.

They said it is not fair for some children to learn in better environments such as good school buildings while others study under trees and other temporary shelters.

The unanimous view of the children were shared at this year's Regional Advocacy and Consultation on Ghana report in Koforidua, which would be captured by the UN Convention on the Rights of the Child.

The event was organised by the Regional Department of Children.

The consultation revealed that while urban school children benefit from Information Communication Technology, those n the rural areas could not boast of even exercise books for class work.

The children said the anomaly was the course of poor grades recorded in the Basic Education Certificate Examination.

Mr Anthony Dontoh, Regional Director of the Department of Children, told the Ghana News Agency that the forum was aimed at allowing children from the 10 regions who were the subject of the report to make input into the document.

Mr Dontoh stressed the need for children to be given equal opportunity to participate in the consultation, which aimed at facilitating their development.

Mrs Florence Ayisi, a resource person from the Department of Children, said all children are equal and needs equal treatment in all spheres of life including education.

She noted that the children had raised salient points that ought to be addressed.