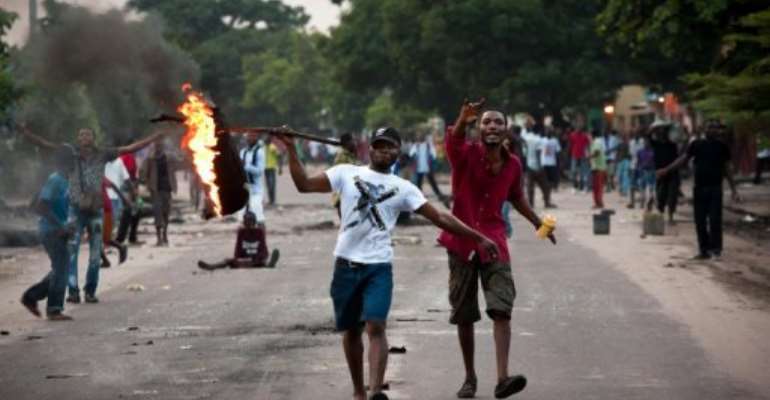 Protesters set cars and piles of tyres on fire and threw stones at police who used teargas and fired shots in the air. By Gwenn Dubourthoumieu (AFP)

After the election commission said Kabila had won the November 28 polls with 49 percent of the vote to 32 percent for Tshisekedi, violent protests erupted in several neighbourhoods of the capital Kinshasa.

Protesters set cars and piles of tyres on fire and threw stones at police, who used teargas and fired shots in the air.

Some looting was reported in several neighbourhoods, and at least one person was shot and wounded.

But a heavy security force presence -- police and presidential guards had been out in force all week, and 20,000 soldiers were on standby at military bases -- put down the initial protests and stopped them from spreading.

There were no reports of major violence overnight, and downtown looked calm early Saturday morning. The charred remains of the previous day's fires dotted the northwest of the city, but the streets were nearly empty except for police and soldiers.

Protests also broke out Friday in the central city of Kananga, a Tshisekedi stronghold, but as in Kinshasa police quashed initial demonstrations, according to reports.

Analysts had warned that the elections, just the second since back-to-back wars from 1996 to 2003, risked unleashing new violence in the vast central African country.

The campaign was marred by bloodshed that according to Human Rights Watch killed at least 18 civilians, most of them shot by Kabila's presidential guard.

The country still faced a tense and uncertain climate Saturday.

Tshisekedi on Friday called the result "an outright provocation to our people" and rejected appealing it through legal channels.

The supreme court is charged with reviewing the result, hearing election disputes and declaring the definitive winner on December 17.

But there are concerns about the court's independence after it was expanded from seven to 27 members at the start of the election campaign.

"We can't do (the judges) the honour of appealing to them. That would confer on them a certain legitimacy."

Saying his party had collected vote figures directly from polling stations, he claimed he had in fact won the poll with 54 percent of the vote to 26 percent for Kabila.

"I consider myself from this day on as the elected president," he told AFP.

Calls for calm poured in from the European Union, the United States, Britain, France and former colonial power Belgium, which urged the country's politicians and security forces to refrain from violence.

Tshisekedi, who had made veiled threats of violence after early results were released showing Kabila in the lead, appealed to the people to "stay calm and peaceful" after unrest broke out in Kinshasa, and asked for international intervention.

"I call on the international community, which has relentlessly encouraged me to guarantee a peaceful process, to not only find a solution to this problem but take all possible measures so that the blood of the Congolese people is not spilled again," he said.

Opposition parties said repeated delays of the election commission's announcement of the results, originally due Tuesday, had raised suspicions it was trying to rig the count.

International election observers have also criticised the commission for a lack of transparency, and said the vote was marred by chaos at polling stations, voters being turned away and incidents of ballot box stuffing.