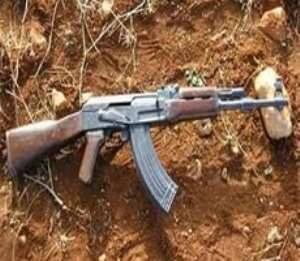 A circuit court at Fiapre near Sunyani on Wednesday sentenced a 19 year-old unemployed, Kwaku Martin, to 20 years imprisonment in heard labour for stealing an AK47 rifle from a policeman's room at Nsawkaw in Brong Ahafo.

Martin pleaded guilty to two counts of stealing and unlawful entry and was sentenced accordingly.

Prosecuting, Police Superintendent Fredrick Adjei told the court presided by Mr. Benjamin Osei that the complainant in the case was a Police Sergeant stationed at Nsawkaw whilst Martin and an accomplice, Bright Kwame Nkramo, now at large, were natives of Nsawkaw.

He said at about 1800 hours on October 10 this year, Sergeant Phillip Kwasi Aggrey closed from duty and because there was no police armory to keep his gun, took it together with 10 ammunition, to his house and kept it under his bed.

Supt Adjei said Sergeant Aggrey locked his door and went out to buy food but whilst he was away Martin and his accomplice broke into his room and made away with a Sony DVD deck, the rifle and the ammunition.

He said the two went to a yam farm at Nsawkaw and concealed the rifle under a tree, whilst Martin wrapped six of the ammunition and hid them on the ceiling of his kitchen and took four of them to Kui in the Northern region for sale.

The prosecutor said police had information that some body was selling some ammunition at Kui so proceeded to the area and expressed interest to buy it.

He said Martin unaware that they were policemen disclosed that he also had a rifle at Nsawkaw that he wanted to sell.

The police officers went together with Martin to Nsawkaw and when the rifle was brought out the police noted it was the same AK47 that had been stolen from Sergeant Aggrey's room.

Supt Adjei said upon interrogation Martin mentioned Bright as an accomplice and the police have mounted a search for him.

He said the police were able to retrieve two of the ammunition but the rest, as well as the DVD could not be traced as Martin refused to disclose where he hid them.