FDI in Retail without Enhanced Social Security will be Suicidal 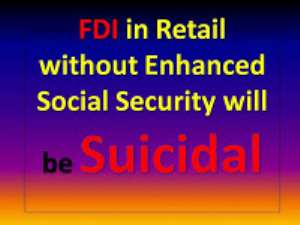 A lot of well off and educated sections of our society are rooting for FDI in retail. There seems to be a disappointment among the middle/upper middle class consumers and the corporate world that the Government of India has put this policy on hold. There was an article published in The Telegraph on 5th December 2011 titled “How Bengal gains from FDI: Experiment that protected 6500 farmers from a curse.”

The article describes how in some districts of Bengal, Pepsico company has brought economic gain and security to several farmers, including the small ones, who have agreed to grow and sell a special grade of 'pepsi potatoes' to the company. It reports that Pepsi buys potatoes through the vendors at a fixed price that is much higher than the wholesale price or prevailing local market price. These vendors are typically big traders, dealers or even big farmers. The article makes a point that the small farmers who sell 'pepsi potatoes' to these vendors are better off than the former situation in which they were dependent on and exploited by the local "Mahajan". Through this example the article makes the concluding point that FDI in retail will bring in more such economic benefit to many more such small farmers. The article, in a way, presents the best possible argument about how FDI in retail will benefit small farmers.

The article is of course written with half facts selected to suit its tenor. What is describes is not representative of what Pepsi or similar firms normally do. Pepsi (Frito Lay, in this case) does not deal directly with small farmers. As the article itself mentions, it deals with intermediaries or with large farmers to cut down its transaction costs. If at all some small farmers are at one end of this chain, they have to interface with bigger intermediaries, and get low price because of their poor bargaining position. Frito Lay does indulge in long term forward and fixed price procurement with big agricultural traders and agents. In the process Frito Lay reduces its long term risk and expected cost by weighing quantity and price fluctuations in the market. The big traders and agents in turn make margin by cutting into margins of those from whom they procure.

It is sometimes possible that the price a small farmer gets by selling his/her produce to pepsi's vendors (intermediary agents) is higher than the locally prevailing price. However, this situation seems to be temporary or an exception. On the supply side, small farmers – dependent on chemical fertilizers, pesticides and pumped irrigation, without having the scale of land to absorb those costs – are almost always less economical than large landowning farmers. On the demand side, companies like pepsi are under perpetual competitive pressures to cut cost and standardize quality. FDI in retail will increase this pressure from the demand side. Such pressures from both demand and supply sides eventually force steady concentration of land in fewer hands, as this movement achieves economy of scale and standardization and can still yield positive margins for the large landowners. This is what has happened to many of high income countries. However this movement also eventually throws off many small farmers from their lands. Most of high income countries responded to this social challenge by providing new employment and skill upgrade opportunities and enhancing social security net.

There may also be a few cases where small farmers get better price because they have organised themselves into some kind of a cooperative. By forming cooperative they increase their bargaining power and gain access to scale related economies, for example, storage in godowns, bulk transport, and direct transaction with wholesalers or bulk sellers. “Cooperatives” is certainly a good way to reduce economic vulnerability of small players. However existence of cooperatives is not in the interest of big intermediary traders and agents as it cuts into the latter's exploitative economic power.

If FDI in retail comes in then the Government must bear additional responsibility to protect interests of small farmers and small retailers (small shopkeepers and vendors). One way is to support them with (i) formation of cooperatives so that their bargaining position in the marketplace increases, and (ii) training in new skills and technologies so that they can increase operational efficiency and cut down their own transaction cost while simultaneously reaching out to larger sections of markets.

Of course social security like what is common in European countries and Japan is needed too. Experience of rich countries tells us that the more markets are opened up the more social security nets are required. So FDI policy must be introduced together with new and enhanced social security policy. The two policies need to go hand in hand. The former without the latter will spell socio-economic disaster for the large masses. (CNS)

DR RAHUL PANDEY - CNS
(The author writes for Citizen News Service (CNS) and is an entrepreneur who specializes in operations research model development, supply chain management, and energy and climate change policy. Formerly he has been a faculty member at Indian Institute of Technology (IIT) Bombay and Indian Institute of Management (IIM) Lucknow. Currently he teaches supply chain management and operations strategy courses as a visiting professor at IIM Lucknow. He can be reached at website: www.citizen-news.org, email: [email protected])