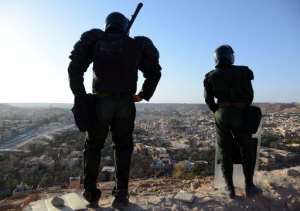 "On the night of April 19, mujahedeen ambushed an army convoy in the Iboudrarene region... The toll was around 30 soldiers killed or wounded, some of them seriously," said a statement posted online.

At the time, a security source said gunmen in the AQIM bastion of Iboudrarene, east of Algiers, had ambushed the convoy and killed 11 soldiers, in the deadliest attack on the military in years.