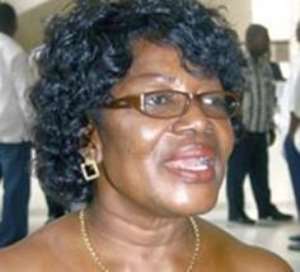 Elmina Dec. 8, GNA- The Central Regional Minster, Mrs Ama Benyiwa Doe, on Wednesday observed that the Metropolitan, Municipal and District Assemblies could meet their development goals if they mobilise the requisite funds for development projects.

She said for the smooth operation of the district assembly it was imperative for assembly members to constantly share ideas and expertise with the district chief executives instead masterminding their removal from office.

Mrs Benyiwa Doe made the observation when she swore into office, Mr Isaac Kweku Sam, the new Municipal Chief Executive (MCE) for Komenda-Edina-Eguafo-Abream at a short ceremony in Elmina.

The Regional Minister on behalf of the President John Evans Atta Mill took the new MCE through the Oaths of Allegiance, Official Oath and the Oath of Secrecy.

Mrs Benyiwa Doe called on the assembly members to co-operate with the MCE and give him the maximum support to enable him perform his duties accordingly.

She said the major concern of the assembly is the formulation of policies and programmes that would speed up the development of the area and not involving themselves in unnecessary controversies.

Mr Mike Hammah, Minister of Lands and Natural Resources who graced the occasion underscored the role district assemblies pay in the dispensation of the decentralisation process, stressing that for any district assembly to operate effectively it was important for it to be well resourced.

He said the main aim of the district assembly concept was to bring governance to the door steps of the citizenry and urged the assembly members to play their roles effectively to enhance the development of the district.

Mr Sam the new MCE, commended the members for the confidence reposed in him and promised that he would operate an open door policy and called for the support of all members to enable him succeed.

He said it is the task of the assembly members to safe guard the development of the Municipality and that they can only do that if they are united and committed to all the development projects being executed in the area.