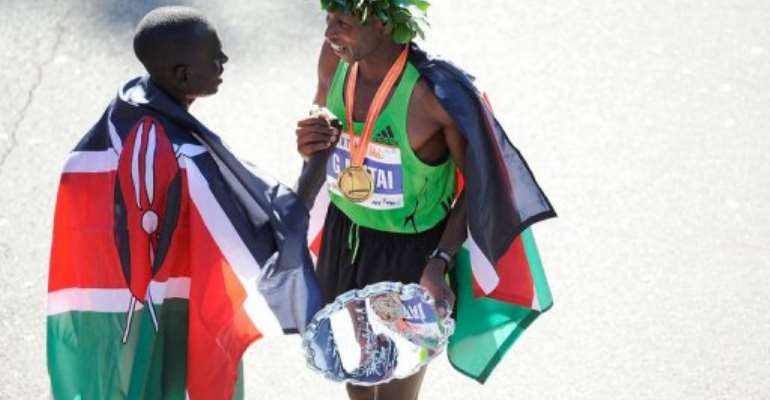 ITEN, Kenya (AFP) - It's a dilemma that other nations can only eye with envy: Kenya simply has too many top athletes chasing the final spot on its revered men's Olympic marathon team.

With Kenya's marathon runners making an unprecedented clean sweep of all six major races in 2011, selectors face the major headache of choosing the last remaining man to represent the country at the 2012 Olympic Games in London.

Wilson Kipsang's time of 2hr 03mins 42secs, clocked when he won the Frankfurt marathon in late October, was the second fastest time in the world -- but even that has not guaranteed him a place on team.

"The selection is proving difficult to make," said Kipsang, speaking in between one of his intense training sessions here in Kenya's high altitude region favoured by athletes.

Emmanuel Mutai, who won this year's London marathon in a time of 2:04:40, said: "Several of us have run very fast times this year and are not even in the team.

"It just goes to show how competitive it is to be selected to compete for Kenya."

In the past, team selectors for major races -- including the Olympics and world championships -- based their choices on athletes' performances at the London and Boston marathons in April.

That left only one spot for several over-qualified runners: apart from Kirui and Makau, Kenya boasts four runners who are considered among the fastest marathon runners in the world this year.

If they are under pressure now, it will only multiply in the lead-up to the Games when the memory of Sammy Wanjiru, who won an historic Olympic marathon gold for Kenya in Beijing, comes even more into focus. On May 15 2011, Wanjiru died after falling from a balcony at his home following a domestic dispute.

Until final selection, and in the wake of Kenya's impressive medals haul at the World Athletics Championships in Deagu, South Korea, competition for that final spot will be fierce.

"Kenya will be looking to its gold medalists and the big performers from Deagu, be it in the marathon or the 800m and 5000m, and will not be satisfied unless they bring back gold," said Irish coach Colm O'Connell.

"The amount of pressure on those athletes to come back with medals is tremendous," added the renowned coach, who has trained several of Kenya's top athletes.

Popular opinion narrows the choice for the last spot to a race between Frankfurt marathon winner Kipsang and Geoffrey Mutai.

Mutai's winning time of 2:03:02 at the Boston marathon in April could not be considered an official world record because the course is not record-eligible.

"Since there is only one remaining chance, the best way is to run faster in the coming year to qualify," Kipsang said, who wants one more race meeting to decide the best contender.

"That is the best way to end this tussle," agreed London marathon champion Emmanuel Mutai, speaking on his return from the New York marathon where he finished second and clinched the World Marathon Majors crown.

"Give us one race, say in London or wherever, and whoever posts the fastest time will make the team," he added.

While the runners jostle for places, they are confident the chosen one will give it everything to follow in trailblazing Wanjiru's footsteps.

"That is not questionable -- in Kenya we have a lot of strong guys who are even faster than Wanjiru," said Kipsang. "It will be proven during the time of the Olympics."