Making ECOBANK Work for the People! 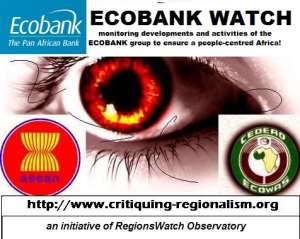 As Africa Trade Ministers were meeting in Accra between for the 7th Ordinary Session from 29th Dec-3rd Dec, 2011, one of the recommendations they made in their "ACTION PLAN FOR BOOSTING INTRA‐AFRICAN TRADE" is for banks like ECOBANK to do better in supporting intra-African trade.

In paragraph 25, they write: "Given the greater perceived risks of intra‐ African trade, the credit squeeze has tended to be more for such trade. This calls for more efforts in the development and strengthening of African financial institutions and mechanisms that accord high priority to the promotion of intra‐African trade and investment. There are currently some examples of African institutions whose activities need to be strengthened and replicated for the boosting of intra‐African trade. They include the COMESA PTA Bank, ECOBANK, the East African Development Bank, the African Export and Import Bank (AFREXIM), and the African Trade Insurance Agency(ATI)"

We know as ECOBANK users that ECOBANK has far from lived up ideally to the name of the "Pan-African Bank" when it comes to the way it deals with its customers. Frequent ATM problems across the continent, including a lack of appreciation of the genesis of ECOBANK, means that we currently have an ECOBANK that is not delivering adequately to the little man in Africa.

ECOBANK remains the only bank on the continent that is backed explicitly by a regional economic community (ECOWAS). It therefore behooves it to go beyond the profit-motive and deliver more responsibly and efficiently to its customers all over Africa, with a special focus on facilitating banking for the African customer. If it is true that ECOWAS has a vision that by 2020, it should ensure a safe and sustainable West Africa, then it behooves it equally to monitor ECOBANK to deliver more adequately to its customers than it currently does.

This group seeks not just to complain about the ECOBANK group, but to facilitate a discussion about how we as citizens can bring pressure to bear on ECOBANK to live up to its claim of being a Pan-African bank by being more transparent and efficient in the way it delivers to customers.

Kindly join me as we collectively put pressure to create a people-centred ECOBANK working for intra-African trade and the dream of an Africa where financial transactions are easily made. Thank you!