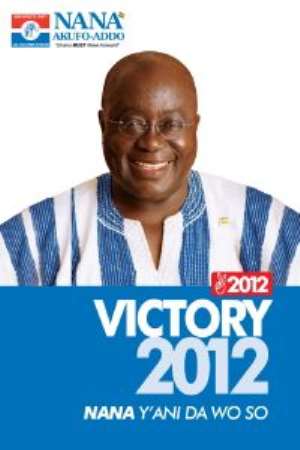 The 2012 presidential candidate of the New Patriotic Party, Nana Addo Dankwa Akufo-Addo, has challenged the Mills-Mahama led National Democratic Congress administration to be bold enough to tell the Ghanaians the truth at all times about the true state of the nation's affairs.

Of particular concern to Nana Addo is the falling standard of education in the country, made evident in the just released BECE results, and the efforts being made by the NDC government to address the infrastructural problems in the educational sector.

Just like figures bundled about regarding the true state of the Tema Oil Refinery debt for instance, Nana Addo pointed out the need for the NDC government to be truthful to Ghanaians about how many schools under trees have been eliminated since the NDC took office.

According to the NPP flagbearer the first official figure on how many schools under trees had been eliminated was put out by Dr Kwabena Duffuor, Minister of Finance, when he presented the 2011 Budget. Dr Kwabena Duffuor stated that for 2010, “so far the construction of   175 schools   have been completed and handed over to house schools under trees.”

However, John Mahama at the National Best Teacher Award ceremony  said   “in 2010 Government eliminated 1,300 schools under trees with the provision of new 6 classroom blocks. This year [2011] another 1,000 new schools have been awarded on contract.”

The NPP flagbearer stated that this was not the only contradiction put on by the NDC as to how many schools under trees they had eliminated.

President Mills, Nana Addo said,   at the 66th UN general assembly stated that over 1,000 schools under trees have been eliminated since he assumed the reins of office in 2009. Prior to President Mills' UN address, the administrator of the GETFund,   Sam Garbah, stated that between 2009 and 2010 the GETFund had eliminated 1,500 schools under trees.

Nana Addo asked, “Who are we to believe, the President or his Vice, the finance minister or the administrator of the GETFund? It is not good for the progress of our country when our leaders continue to provide us with misleading statistics and information.”

Nana Addo re-echoed his vision of marked that “we need to take some radical steps in our educational sector if we are to make that much needed progress, as a country” adding that what the NPP will concentrate on are access to and quality of education.

“We must ensure added value to the intellect of every Ghanaian if we are to succeed in adding value to the Ghanaian economy, where there will be decent, well-paying jobs for the young people of our country”, Nana Addo said.

Nana Addo continued “It is for this reason that my administration will make Senior High School free and also the first point of exit for basic education and also put the teacher first. For the next decade, we have no option than for the state to assume the greatest burden of providing education for the citizens of our nation.”

The NPP flagbearer made this known when he addressed students of the Nyankpala campus of the University for Development Studies (UDS),  last Wednesday evening,   as part of his listening campaign tour of the three northern regions.