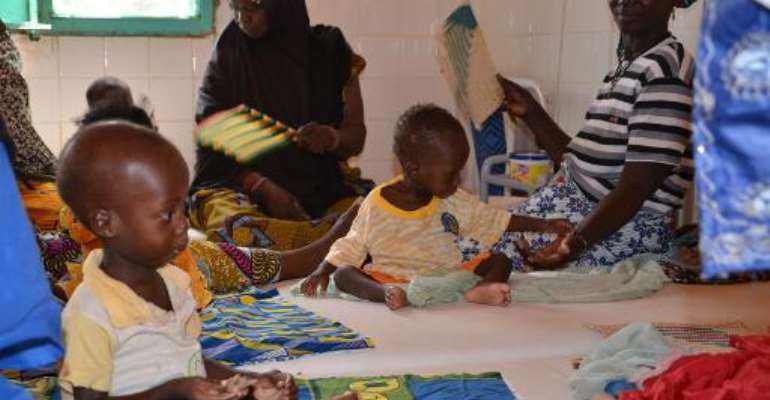 A picture taken on October 14, 2013 shows children at a hospital in Tillaberi, western Niger. By Boureima Hama (AFP/File)

"Women should be able to demand their rights. But I also want men to join this call," Ban said in Niamey, on an unprecedented regional tour with the leaders of five international organisations.

"Help us create families where mothers and fathers decide together how many children they want to have. The time to do this is now," he said, at the launch of a $200-million regional initiative to improve women's reproductive health and girls' education.

"This call to action on women's empowerment and demographics is not simply about numbers. It is about people. When women and girls have the tools to shape their own future, they will advance development for all."

The fertility rate in Niger tops seven children per woman and more than two thirds of the population is under 24, exerting huge economic pressure on the impoverished, landlocked west African state.

Speaking at the same event, Niger President Mahamadou Issoufou noted that his country's population had trebled since he was as old as his own children are now.

"They are causing our future needs to grow exponentially, even as our current needs -- in food, education and health, are far from being met," he said.

Ban's tour started in Mali and will also take him to Burkina Faso and Chad. He is accompanied by the leaders of the European Union, World Bank, African Union and African Development Bank.