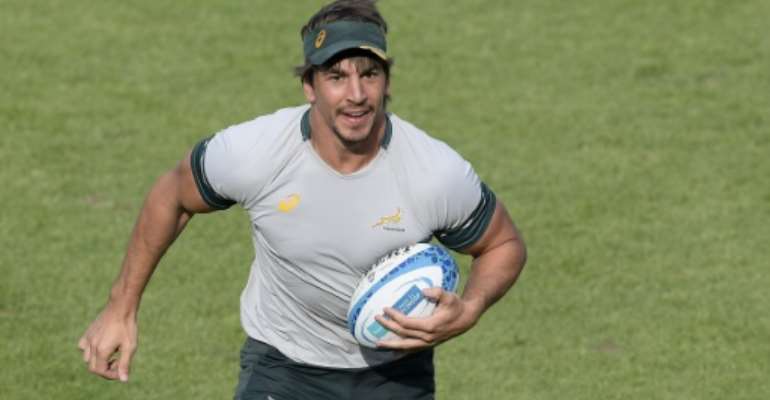 South Africa's lock Eben Etzebeth, pictured on August 26, 2016, could play in the Premiership following the conclusion of the Springboks' European tour before returning home. By Juan Mabromata (AFP/File)

English and European champions Saracens had hoped to sign the lock on a three-month deal in a bid to cope with a second-row injury crisis that sees them without England internationals George Kruis and Maro Itoje.

But there has been speculation that Etzebeth could sign a short-term deal with Premiership basement club Bristol in a bid to boost the southwest side's chances of avoiding relegation.

The 25-year-old, set to play for South Africa against England at Twickenham on Saturday, could play in the Premiership following the conclusion of the Springboks' European tour before returning home to see out the final year of his current contract with the Stormers.

Coetzee said Monday there were pros and cons to Etzebeth staying in Europe to play club rugby.

"Eben Etzebeth playing up here would be a great experience for him because he would be playing against top quality locks in the northern hemisphere game," the Springbok coach explained.

"The conditions would be different and he would learn from it.

"But on the other hand it wouldn't be good for the Springboks because Eben would be missing out on a conditioning phase and he would go straight from English club rugby to Super Rugby and then June Tests next year and so on. Hopefully, it will only be for this year."

Coetzee, however, added: "I can assure you it is definitely going to happen but I'm not sure where he will go."

Etzebeth, speaking before the Springboks' tour-opening 31-31 draw with the Barbarians -- a match where he came off the bench in the second half -- said: "I'm focusing on Saturday's game against the Barbarians and then the end-of-the-year tour. After that, nothing is pen on paper or certain.

"I'm loving being here in England and the weather is better than I thought," the 53-times capped forward added.

Over 1 Million Students Have Benefitted From Free SHS — Bawu...
1 hour ago

47% Of Ghanaians Believe Ghana Is Moving In Right Direction ...
1 hour ago