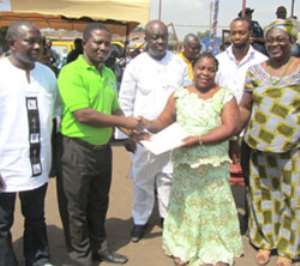 52 year old Mrs. Gloria Owusu, a resident of Community 21 within the Ashaiman Municipality, on Friday was adjudged the Overall Best Farmer for the Municipality in this year's National Farmers' Day celebration.

For her prize, she took home a set of room furniture, one TV set, five cutlasses, wellington boots, assorted agro chemicals, one piece of wax print, one knapsack sprayer, and Tuna flakes.

Delivering the keynote address, the Ashaiman Municipal Chief Executive, Numo Addinortey Addison, said the Ministry of Food and Agriculture, from next year, would subsidise 165,000 metric tonnes of chemical and liquid fertiliser for farmers, as part of the government's efforts to increase agriculture productivity.

'In this vein, the Ashaiman Municipal Assembly, which is one of the main stakeholders, is providing support for the housing for poultry production. A poultry house located near Afariwaa has been earmarked for renovation to commence this project.

'As a way of sustaining these policy measures, the NDC government intends to channel all monies received from the above programmes and projects into a revolving fund, which would be re-accessed by eligible farmers in subsequent years,' he observed.

Numo Addinortey hinted that the government in 2011 supported Ashaiman maize, onion and rice farmers with an amount of GH¢46,374, adding the block farming concept still provides credit (at a zero percent interest rate) in kind to farmers to support the cultivation of maize, rice and onion.

He explained: 'The package covers agro inputs like seeds and agro chemicals. Farmers who benefit are only required to pay back this credit after the sale of their harvested produce.'

The Ashaiman Mayor disclosed that from December 8 to 11, 2011 his outfit would organise a cultural festival dubbed 'Ashaifest,' under the theme 'Developing a 24-hour city', to foster unity among the people, and to showcase the various cultural heritages in Ashaiman.