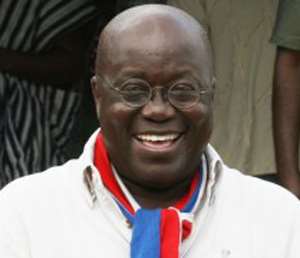 Although not for the highest bidder, the choice of a running mate to partner Nana Addo Dankwa Akufo-Addo is witnessing an unusual lobbying from not only the prospective personalities, but also their assigns, on a scale unmatched in the party's history.

Personalities whose names have strongly come up for the position are Dr. Mahamudu Bawumia, a former deputy Governor for the Bank of Ghana and the 2008 running mate;  Lepowura Alhaji Nurudeen Jawula, a former Chief Director of the Ministry of Health; Ambrose Dery, deputy Minority Leader; and Alhaji Haruna Alhassan, deputy Managing Director of Metro TV.

Even though Dr Bawumia and Hon Dery appear to have the upper hand, the other two hopefuls are not giving up even as more people also throw their hats into the ring for recognition.

Adamu Daramani Sakande, embattled MP for Bawku Central and Mustapha Hamid, a spokesman for the flagbearer in the 2008 elections, have also been mentioned in some circles.

A lobby industry has suddenly sprung up in the party propelled by activists who present themselves as knowing which buttons to press for the final running mate nod.

It is their season and they are all over the place, appearing to be selling their services for cash to any interested party person eyeing the position of the NPP vice presidential slot.

The intensity comes after the election of Nana Akufo-Addo as the party's 2012 flagbearer.

Nana Addo is to be preparing to name the running mate by the close of the month.

The seemingly rancorous lobbying is happening even as the flagbearer is busy in the North undertaking his listening campaign tour and therefore requiring the input of those engaged in the favour-winning shuttles.

One of the tools of such lobbyists is the resort to mudslinging of other contestants for the privileged position.

The final decision as to who wins the coveted position is the prerogative of the flagbearer based on the recommendations of a committee responsible for counseling him on the final choice. The forgone notwithstanding, the lobbyists are very active, shuttling from one location to the other, dangling the attributes of their clients in the most aggressive manner ever seen in the party's history in a bid to convince powerbrokers in the political grouping.

They are also pointing the weaknesses of their competitors as a means to win favours for their clients.

But in consonance with the party's standard of picking a Muslim for the running mate position, those who do not meet this could be wasting their time in their attempts to win the heart of the flagbearer and the committee.

A DAILY GUIDE report on a similar subject last Friday about the shortlist of two persons by the committee assisting the flagbearer in making the choice, ruffled a lot of feathers in the party, both locally and outside, some of who challenged its integrity.

Information reaching DAILY GUIDE suggests that some party apparatchiks who would rather the religion attribute was dropped have attracted the wrath of Muslims in the party who insist the status quo is maintained.

Prof Adu Boahen of blessed memory had Lawyer R.I. Alhassan, a Dagomba Muslim, as his running mate, as did former President John Agyekum Kufuor when he picked Alhaji Aliu Mahama, also a Dagomba- a partnership which brought the NPP to power.

The NPP has therefore always reserved the position for top-notch Muslim personalities in the party, and the flagbearer expressly made a promise to adhere to it recently when he visited Koforidua Zongo during the last Muslim festival of Eid ul Adha.

Reliable information reaching DAILY GUIDE suggests that the committee charged with advising the flagbearer has narrowed the list, keeping such details close to its chest.

One of the committee members confided in the DAILY GUIDE that 'we would not be stampeded into announcing the name of the person we intend presenting to the flagbearer. We would do that when we deem it appropriate. Let people continue with their speculations.'