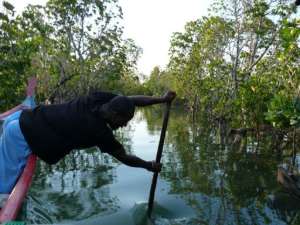 BELO-SUR-MER, Madagascar (AFP) - Mangroves spread over thousands of hectares of Madagascar's west coast, rich with fish and crabs, but fishermen have declared some areas off limits, seeking to ensure future catches.

"The communities chose to close several sites for four months of the year, to allow the crabs and fish to reproduce," said Thomas of Blue Ventures, a British marine conservation group, who like other locals goes by just one name.

Three sites totalling 200 hectares (nearly 500 acres) around the town of Belo-sur-mer were chosen to pilot the project in the coastal forests that cover 4,000 square kilometres (1,500 square miles) of Madagascar.

These thick mangrove swamps are home to mud crabs, known formally as Scylla serrata, whose catches are the economic mainstay of this region.

Since 2004, community groups have closed more than 130 areas to fishing, but this is the first time they have blocked fishing in a mangrove.

Antanimanimbo is a hamlet of a few wooden huts built on a finger of sand between the ocean and the mangrove. Its 100 residents live by the rhythm of the tides.

"There used to be so many crabs in the mangrove. Now there's just a few. That makes me worry for future generations," said Jean-Francois, the 62-year-old vice president of the village's fishing association.

The group decided to close an area of 120 hectares to allow the crabs to recover from years of overfishing, which had depleted the stocks.

Special nets and the creation of reserves are solutions proposed by Blue Ventures and accepted by consensus among residents.

"The entire village respects the ban because we organised meetings and discussions to think about protecting our fishing zone, and we decided to adopt this system," Jean-Francois said.

To enforce the ban, the community enacted a "dina", a local law that every one agrees to abide by. Anyone who violates the ban can be fined by the community.

"To introduce this system, Blue Ventures has a technique: exchanges among the villages. We bring fishermen to see villages where this has worked," said Thomas, who has worked on several similar projects.

"Other fishermen from the north will also come here to see this site," he said.

Blue Ventures' goal is to expand this model across Madagascar's southwest coast to help communities that are seeing their natural resources dwindle, whether it's crabs, fish, octopus or sea cucumbers, all types of sea life are affected.

Overfishing is not caused only by local fishermen. Big fishing ships, sometimes without licences, drop their nets freely in Madagascar's waters.

A study by Blue Ventures and the University of British Columbia in Canada found that nearly 4.7 million tonnes of fish have been caught since 1950, only about half of it known to authorities.

Although local communities cannot do much to stop industrial fishing, they can protect coastal waters and create a place for themselves in the commercial market, Blue Ventures said.

"If the fishermen adopt this system over the long term, they could negotiate better prices from buyers who will come when the reserve re-opens," Thomas said.