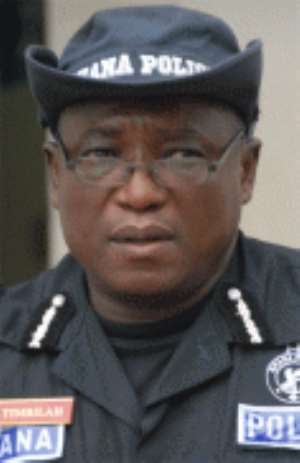 An attack on doctors and nurses on duty at the Accident and Emergency Unit of the Komfo Anokye Teaching Hospital by five policemen in mufti around 2 p.m. Saturday to allegedly demand the immediate arrest of a security guard resulted in the medical officers abandoning their tools and patients running in different directions.

Apart from patients who were bed-ridden and could, therefore, not flee, all other patients receiving medical care took to their heels when the policemen stormed the unit.

The incident halted medical care at the ward for over three hours, as both medical officers and patients who were traumatised by the unprovoked attack felt insecure.

Led by one officer identified as DSP Adjei Nimo, the five policemen also allegedly assaulted one security guard, identified as Eric Kankam, tearing his uniform and leaving him with bruises on the face and swollen cheeks.

The victim was also detained for some hours when he lodged a formal complaint at the Central Police Station. It was the quick intervention by the KATH authorities that forced the police to grant him bail.

The incident has created serious tension at the hospital, with the medical officers demanding immediate action from the Ashanti Regional Police Command and the Inspector-General of Police to bring the police officers to order, failing which they would abandon their tools with immediate effect.

At the time of going to press, the hospital authorities were in a meeting to formally write to the police hierarchy for it to identify the police officers involved in the brutality and bring them to order.

Explaining the circumstances that led to the attack in an interview with the Daily Graphic, one of the victims, Mr Abdul Ganiyu Bansi, said he was on duty at the Barracks gate at the hospital around 2 p.m. when he spotted an unregistered 4x4 Honda vehicle attempting to enter the Accident and Emergency area of KATH.

He said some motorists had been using the gate to enter Bantama, a situation that had created disorder at the hospital.

“Because of that, the hospital authorities ordered us to prevent any motorist who had no business at the hospital from entering the yard,” he explained .

Mr Bansi said when he demanded to know the mission of the driver, “he ignored me and forcibly entered the yard, a situation that caused me to bang at the vehicle”.

He said his action provoked the man, who stopped the vehicle and confronted him (Bansi), “demanding whether I knew who he was and that he would show me where power lay”.

According to Mr Bansi, a medical officer at the ward, Dr Paa Kwesi, who allegedly witnessed the confrontation, intervened to cool down tempers, after which the man in mufti, who had still not identified himself, drove back towards Adum.

He said a few minutes later, the man returned to the hospital with four others in mufti at a time he had left the gate to attend to some official duties.

He said the men met Mr Eric Kankam at the gate and without any provocation they vented their spleen on him by hitting him on all parts of the body and tearing his uniform before storming the ward to molest the nurses and doctors on duty.

When contacted, the Ashanti Regional Police Commander, DCOP Patrick Timbilla, said he was initiating investigations into the case to bring the culprits to order.

Describing the conduct of the officers as unprofessional, he said he would not condone such acts of indiscipline intended to bring the name of the Police Service into disrepute.