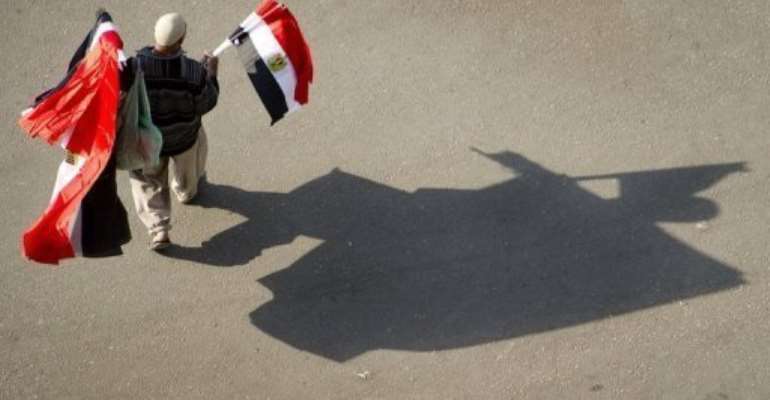 The new Egyptian cabinet hopes to be sworn in by December 7. By Odd Andersen (AFP)

CAIRO (AFP) - Islamists trounced their liberal rivals in the opening phase of Egypt's first election since the fall of Hosni Mubarak, figures showed on Sunday, with one in four voters choosing hardline Salafists.

Islamist parties won 65 percent of all votes cast for parties in the first round of parliamentary polls, while the secular liberals who played a key part in the January-February uprising managed just 13.4 percent.

Among the Islamist vote, the moderate Freedom and Justice Party (FJP) of the Muslim Brotherhood won 36.6 percent, followed by the hardline Salafist Al-Nur party with 24.4 percent and the moderate Al-Wasat with 4.3 percent.

"We welcome the Egyptian people's choice," FJP spokesman Ahmed Sobea told AFP. "Egypt now needs all parties to cooperate together to get it out of its crisis."

The Brotherhood had been widely forecast to triumph as the country's most organised political group, well known after decades of charitable work and opposition to Mubarak's 30-year autocratic regime.

But the showing from Salafist groups, which advocate a fundamentalist interpretation of Islam dominant in Saudi Arabia, was a surprise, raising fears of a more conservative and overtly religious 498-member new lower parliament.

The Salafis, newcomers who founded parties only after the toppling of Mubarak in February, trailed the FJP only slightly in the city of Alexandria and won a majority in northern Kafr el-Sheikh and Damietta provinces.

Followers of the Salafi strain of Islam advocate a stricter segregation of the sexes, the full veiling of women, a ban on alcohol and the idea that all sovereignty flows from god.

There were few bright spots for the liberal secular movement which played a key role in the 18-day uprising that led Mubarak to stand down and hand power to a council of army leaders charged with ushering in democracy.

Mohammed Hamed, a candidate with the liberal Free Egyptians party, warned that the Islamists would face widespread resistance if they enforced a strict interpretation of Islam, followed by about 90 percent of Egyptians.

"All the people will turn into the opposition. Most Muslims are not extremist. If they do not feel the danger (of hardline Islamism) yet, they will if it is applied," he said.

Mohammed Abdel Ghani, a liberal candidate, told the independent Al-Shorouq newspaper that his movement needed to counter propaganda that "non-Islamist candidates were infidels."

The results in Egypt fit a pattern established in Tunisia and Morocco where Islamists have also gained in elections as they benefit from the new freedoms brought by the pro-democracy movements of the Arab Spring.

Israel, which shares a border and peace agreement with Egypt, expressed deep concern over the trend.

"We are worried," Finance Minister Yuval Steinitz told Israel public radio on Sunday, adding that he hoped Egypt "won't become an extremist Islamist state because that would put the whole region in danger."

The Brotherhood has been at pains to stress its commitment to multi-party democracy, inclusiveness and civil liberties, while also advocating the application of sharia law.

Nevertheless, the prospect of an Islamist-dominated parliament raises fears among liberals about religious freedom in a country with the Middle East's largest Christian minority and women's rights.

Voting on Monday and Tuesday was only the opening phase of an election for a new lower house of parliament that is taking place in three stages, but the returns reveal the main political trends now shaping Egypt.

Only one third of districts have voted. The rest of the country will go the polls in a further two stages later this month and in January.

Voters were required to pass three votes: two for individual candidates and one for a party or coalition.

The figures above are for the party results.

Both the FJP and Al-Nur stand to gain further seats in run-off elections on Monday for the individual candidates. Only four out of 56 individual seats were won outright in the first round of voting.

The FJP said it had 45 candidates in the 52 run-offs to be decided on Monday, according to its website. Al-Nur has 26, a party official told AFP.

The Brotherhood and other political parties are now expected to face a fierce power struggle for control with the interim army regime to ensure Egypt's revolution is completed and power is handed over.

The first test will be over the formation of a new caretaker government, with the Brotherhood insisting on the right to form a cabinet to replace the army-appointed administration.

The second struggle with be over a new constitution next year and the relative powers given to parliament, a new president to be elected by next June, and the army.

For Monday and Tuesday's vote, elections committee secretary general Yusri Abdel Karim said final percentages would not be given until the end of ballotting for the lower house of parliament on January 10.

The percentages were calculated by AFP on the basis of total number of valid votes cast.

After the lower house is elected in January, Egyptians will go to the polls for a further three rounds of voting to elect an upper chamber.