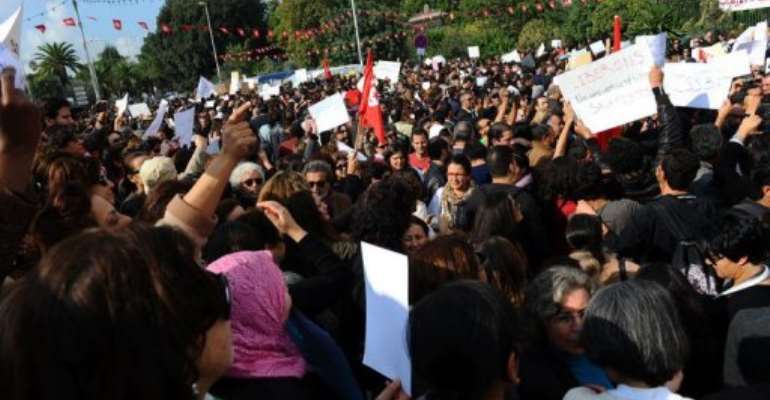 Tunisian people demonstrate outside the Constituent Assembly in Tunis. By Fethi Belaid (AFP/File)

The military's ouster a week ago of Morsi, after massive protests calling for his resignation, pushed the divided country into a vortex of violence that has already claimed dozens of lives.

The fresh violence came less than a day after interim president Adly Mansour set a timetable for elections by early next year, and appointed Hazem al-Beblawi as the new prime minister and Nobel peace laureate Mohamed ElBaradei as vice president responsible for foreign affairs.

Cracks within the coalition that lobbied for Morsi's ouster, and defiant protests by his loyalists, have returned the country to an uncertain transition to democracy ahead of the new elections.

The National Salvation Front (NSF), the main coalition that had called for Morsi's overthrow, has denounced Mansour's decree and demanded amendments.

The Muslim Brotherhood had already rejected Mansour's temporary charter as a decree enforced by "putchists".

Beblawi, a former finance minister and economist, was on Wednesday to begin talks on forming his cabinet, the official MENA news agency said.

He would offer the Muslim Brotherhood posts in the new government, the agency quoted a presidential aide as saying.

But the Muslim Brotherhood spurned the offer."We do not deal with putchists. We reject all that comes from this coup," spokesman Tareq al-Morsi told AFP.

The continued standoff with Morsi's loyalists, who demand the reinstatement of Egypt's first democratically elected leader, has exacerbated fears of further bloodshed after his overthrow.

In the worst incident on July 3, at least 51 people, most of them supporters of the ousted Islamist, died in clashes outside a military barracks in Cairo on Monday.

Mansour must also deal with the frayed coalition that helped topple Morsi.

An official with one of the parties in the NSF told AFP that Mansour's 33-article declaration foresees new "legislative, executive and judicial powers" for the interim president.

"You would look like a hypocrite now. It makes it look as if you are not against dictatorship, just against a dictatorship that is not from your group," he said.

The official requested anonymity as his party prepared its own statement, amid apparent fissures in the loose coalition, which was led by ElBaradei until Morsi's ouster.

Many within the coalition are wary of repeating the mistakes of the last military led transition, between Hosni Mubarak's ouster in 2011 and Morsi's election in June 2012.

"You dont want to end up being the stooge of the army by signing off on a flawed roadmap," said Michael Hanna, an Egypt expert with the US-based The Century Foundation think tank.

Elsewhere, two people were killed in a rocket propelled grenade attack on a checkpoint manned by soldiers and police, medics said.

The Muslim Brotherhood has called for an "uprising" to restore Morsi.

On the opposing end, Tamarod, the movement that spearheaded the grassroots campaign against Morsi, complained that it had not been consulted on the transition plan announced by Mansour and would also make proposals for changes to the blueprint.

But the army warned it would brook no disruption to what it acknowledged would be a "difficult" transition.

The blueprint unveiled by Mansour is intended to replace the controversial Islamist-drafted constitution, suspended on Morsi's ouster, and put the new charter to referendum.

Parliamentary elections will then by early 2014 and Mansour will announce a date for a presidential election once the new parliament has convened.

The United States, which provides $1.5 billion in mainly military aid to Egypt, said it was "cautiously encouraged" by the timetable proposed for a new presidential election.

The Muslim Brotherhood held fresh protests on Tuesday against Morsi's ouster and Monday's fatal shootings outside the Cairo headquarters of the elite Republican Guard.

Morsi's single year of turbulent rule was marked by accusations he failed the 2011 revolution that ousted veteran strongman Mubarak by concentrating power in Islamist hands and letting the economy nosedive.

In a boost for the economy, Saudi Arabia and the United Arab Emirates, both of which had been wary of Morsi and his Muslim Brotherhood, announced on Tuesday that they would give Egypt a combined total of $8 billion in assistance.