Fishermen fear of possible accident and loss of lives at sea 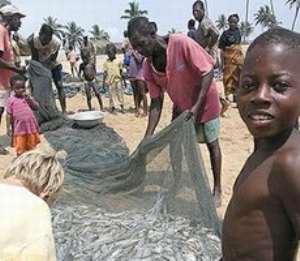 Fishermen at Ahanta Discove, Akwadei and Cape Three Points suspect that an oil tanker might have crushed into fishing canoes and killed the fishermen on board.

The communities have since started conducting roll calls and sending messages to other fishing communities to find how many of their colleagues had not returned from sea.

Correspondent Kweku Owusu Peprah reported that the people are living in fear.

The Chief Fisherman of the area, Nana Kweku Dadzie said some fishermen reported receiving threats from vessels which asked them to move back or be pushed.

Nana Dadzie said the captains of the vessels boasted of crushing a vessel on the high seas.

Officials of the Ghana Maritime Authority have been informed of the incident and have begun investigations.

The Environmental Protection Agency meanwhile says it is not aware of the development.

12 organised crime suspects busted for carjacking, robbery a...
40 minutes ago