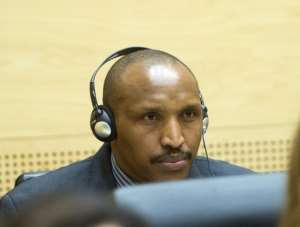 The Hague (AFP) - Prosecutors at the International Criminal Court have accused Congolese former rebel commander Bosco Ntaganda of trying to derail his war crimes trial by tampering with key witnesses.

In a filing to the court, chief prosecutor Fatou Bensouda said a review of 450 telephone conversations "reveals Ntaganda's involvement in a broad scheme to pervert the course of justice".

The allegations, filed to the court on Monday, is another twist in the long-running trial of Ntaganda who has denied 18 charges of war crimes and crimes against humanity in the Democratic Republic of the Congo.

In September, he went on an unprecedented hunger strike for two weeks saying he was "ready to die" to protest strict visitor restrictions imposed in him out of fears he may tamper with witnesses.

At the time, he said the prosecutors had produced no evidence that he was interfering with witnesses.

The standoff was resolved when he won permission to appeal against the restrictions and judges ordered that arrangements be made for him to see his wife.

Once dubbed The Terminator, Ntaganda is on trial for savage ethnic attacks carried out in the Democratic Republic of the Congo by his rebel Patriotic Forces for the Liberation of Congo (FPLC) in 2002-2003.

Prosecutors say he played a central role in the Ituri conflict in the far northeast which rights groups believe alone has left some 60,000 dead since 1999.

The trial opened in September 2015 after the former warlord walked into the US embassy in Kigali in 2013 to turn himself in.

The eastern Democratic Republic of Congo has been mired for two decades in ethnically-charged wars, as rebels battle for control of its rich mineral resources.

In delivering the guilty verdict, presiding judge Bertram Schmitt said the tribunal aimed to send "a clear message that the court" would not accept the bribing of witnesses.

Bemba on Monday submitted notice he intends to appeal the guilty verdict, for which he has not yet been sentenced.

Why Is NAM1 Free But Menzgolders Being Harassed By Police? –...
56 minutes ago