Honey makers bracing up for suppliers for export 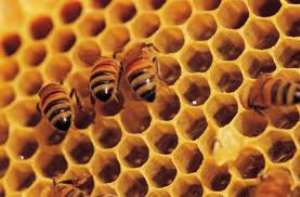 Ho, Dec. 2, GNA - Honey farmers in the Volta Region are bracing up for a sales boom when shipment of honey for the European Union market begins next January.

They are, therefore, stocking supplies to sell to the exporters in big volumes rather than in bits on the local market.

Atlas Foods Ghana Limited announced early November this year it had facilitated a franchise that allowed Ghana for the first time ever to export honey to the European market.

Mr Kieran Lavery, Managing Director of Atlas Foods Ghana Limited, told the Ghana News Agency (GNA) that the process was costly but worthwhile as it could considerably raise the economic profiles of honey producers.

Mr Lavery said the international market for honey is growing and that Ghana could fill the supply gap being created by instability in other producing zones in Africa.

Madam Philomena Afriyie, Owner of Philomena Bee Farms at Nkwanta that supplied part of the 20 tonnes honey packaged for the first shipment, said her farm had the capacity to increase production to meet market needs.

She told the GNA that the Atlas Company deal was good but a price increase was needed as incentive for local producers.

Mr Tordey Gershon Amaglo, speaking for the Volta Regional Association of Bee Keepers, said the emerging export market for Ghana's honey could tickle the rather sluggishly growing industry in the Region.

Mr Amaglo, who is the Customer Care Officer at the Ho Municipal Office of the Forestry Commission, said bee keeping, which is being developed as a non-timber forest product, could soon assume its economic leverage in the Volta Region and Ghana.

Mr Benjamin Bankas, Business Development Officer of Atlas Foods, told the GNA that for him the export bid was a golden opportunity for Ghana to begin to build a Euro-Ghana Agro-Produce business.

He said the product packaged for export was mainly from honey makers in the Nkwanta and Kpassa areas.

Mr Bankas said Atlas Foods, which currently has a staff of five, has a strong presence in Europe in the person of John Caulderbanks, the Company's Executive Director.

The Business Consultancy and Research Unit of the Evangelical Presbyterian University College, in a baseline survey, confirmed that beekeeping is a huge area that needs investment.

For example, that study indicates that beeswax has over 120 industrial uses with ready markets in Ghana and abroad.