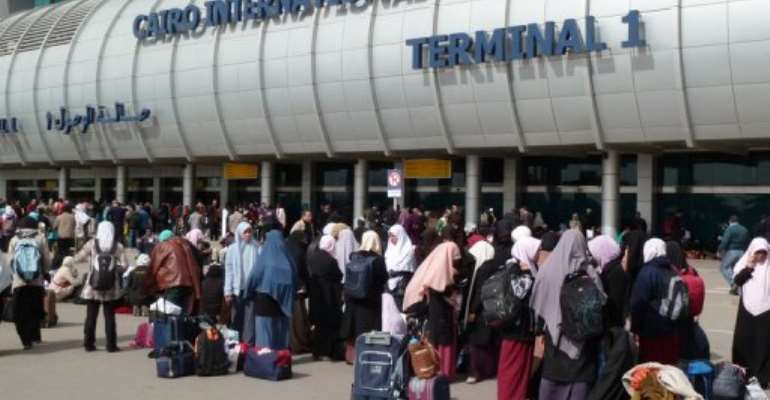 CAIRO (AFP) - For decades, Egypt's Westernised elite kept the country's growing religosity at arm's length, but a projected Islamist surge in the first post-revolution polls has driven many to think of moving abroad.

Sporting the latest fashions and mingling in upmarket country clubs, Egypt's rich fear a victory for the Muslim Brotherhood and hardline Salafis in the first phase of parliamentary elections presages change ahead.

"I hope they don't impose the veil and ban women from driving like in Saudi Arabia," said coquettish fifty-something Naglaa Fahmi from her gym in the leafy neighbourhood of Zamalek.

In a nearby luxury hotel, Nardine -- one of Egypt's eight million Coptic Christians who are alarmed by the prospect of a new Islamist-dominated parliament -- is pondering a move aroad.

"My father is seriously thinking about sending me and my brothers elsewhere because he thinks we won't have a future in the country with the Salafis," said the banker in her twenties.

Ten months after a popular uprising ended the 30-year autocratic rule of Hosni Mubarak, millions of Egyptians embraced their new democratic freedoms earlier this week at the start of multi-stage parliamentary elections.

The preliminary results to be published on Friday were expected to show the moderate Muslim Brotherhood as the dominant force, but with a surprisingly strong showing from the hardline Al-Nur party.

Its leaders advocate the fundamentalist brand of Salafi Islam, rejecting Western culture and favouring strict segregation of the sexes and the veiling of women.

They say they have been the victims of Islamophobia and sustained fear-mongering by liberals in the Egyptian media.

Nevertheless, the fear that they will try to impose their values on the rest of society has driven Angie to consider leaving her comfortable Cairo life behind.

"My husband recently got a job offer in Dubai. In the beginning I was hesitant, but now, with all that's happening, I'm encouraging him to take the job and I'll join him with our daughter," she said.

"The Gulf has become more liberal than Egypt," she told AFP.

For Ahmed Gabri, having the Islamists in power means having his freedoms restricted.

"I will leave the country," said Gabri, a Muslim. "I will not stand living in a puritanical climate. Why don't they just let people live the way they want?"

The next parliament will be charged with writing a new constitution and the idea of an Islamist-dominated assembly has sent shockwaves through some segments of society.

"They don't scare me. We have democracy now which means we'll be able to remove them if they don't suit us," said Manar, a tall blonde in her 40s.

"It's the not the Muslim Brotherhood that worries me because they want to appear in the best light, it's the Salafis that I'm concerned about," she said.

Iman Ragab, a shop assistant, has resigned herself to the election's likely outcome.

"This is democracy, you have to accept the results of the ballot," she said.