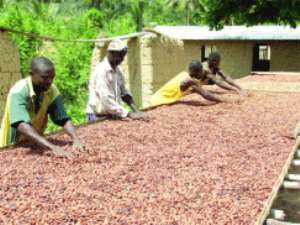 Sixty-six distinguished farmers and fishermen in the country will step forward to receive national honours Friday at the 25th National Best Farmers Awards ceremony at Agona Nsaba in the Agona West District in the Central Region.

At stake is the ultimate prize of a three-bedroom house for the overall National Best Farmer to be built at a location of his or her choice.

Other mouth-watering prizes are ready for the taking for the winners and runner-ups in the various categories of the awards.

Similar award ceremonies will be held at the regional and district levels in the country.

The National Best Farmers Awards ceremony, which was instituted in 1987, is held on the first Friday in December every year with the aim of rewarding deserving hardworking farmers and fishermen for their contribution to the development of agriculture.

Anchored on the theme: “Accelerated agricultural modernisation for food security and economic transformation”, this year’s awards come off at the back of the government’s commitment to improve farmers’ access to planting materials, farm and agro-processing machinery and irrigation equipment to enhance effective farming and increased agricultural productivity.

The government is seeking to rapidly modernise the agricultural sector with the view to enhancing food security, job creation, especially for the youth, and the quality of life of farmers and fishermen.

One innovation at this year’s ceremony is that all research institutions in the country will make public their findings on how to increase productivity in the agricultural sector.

That is part of the government's determination to use modern technology to boost food and livestock productivity.

Meanwhile, Members of Parliament (MPs) have lauded farmers and fishermen in the country for working hard to be the backbone of the economy over the years, writes Emmanuel Adu-Gyamerah.

The MPs, however, called for the provision of the needed infrastructure to reduce the over-reliance on natural rainfall for farming activities.

The MPs were contributing to a statement made on the floor of the House by the Chairman of the Select Committee on Food, Agriculture and Cocoa Affairs, Dr Alhassan Ahmed Yakubu, to commemorate this year’s Farmers Day, which falls today.

In his statement, Dr Yakubu, who is also the MP for Mion, acknowledged the fact that farmers and fishermen toiled in the fields and on the turbulent seas to provide food and raw materials to keep the wheels of industry turning and produce needed on the world market to rake in foreign exchange for development.

He said unfortunately, they did so under serious constraints, including life-threatening situations, low social amenities and weak infrastructure, to the extent that some communities were seen as ‘overseas’ because they could not communicate with neighbouring communities.

He said the principal challenge confronting farmers and the agricultural sector was the continuous reliance on natural rainfall to grow crops and livestock, explaining that due to climate change and its resultant impact on the global weather phenomenon, there was a drastic change in rainfall amounts and distribution.

That, he said, had resulted in frequent droughts and floods which eventually resulted in crop failure.

Dr Yakubu said the government, through the Ministry of Food and Agriculture, had formulated the appropriate policy response to arrest or reduce the impact of these challenges to make farming more attractive as a way of life and a profitable business.

He said policy emphasis was now on developing the entire value chain for the important crop commodities, so that value addition would be the emphasis to benefit farmers and others in the value chain financially.

Dr Yakubu said it was heartwarming that the construction of the Accra Plains Irrigation Project would start next year, adding that when completed, the project would add 10,000 hectares to the area of irrigable land in the country’s agricultural production effort and consequently increase the proportion of production under irrigation.

He, however, called for a lot more to be done, particularly in the area of research, to generate the appropriate and high-yielding technologies to complement the investments being made.

Contributing to the statement, the MP for Tano North, who is also the Ranking Member on the Food, Agriculture and Cocoa Affairs Committee, Mr Ernest Akubuor Debrah, expressed concern over the lack of the needed infrastructure to enhance farming in the country.

He advocated the construction of landing sites and the provision of ice plants at all major fishing towns to facilitate the work of fishermen.

For his part, the MP for Kwadaso, Dr Owusu Afriyie Akoto, expressed worry over the dumping of cheap poultry products and rice into the country and explained that the situation was gradually making rice and poultry farmers poorer.

He said there was the need for the institution of adequate tax measures to enable farmers in the country to compete favourably with their counterparts in other parts of the world.

In another development, another statement was made on the floor of the House by Alhaji Muhammed Muntaka Mubarak, the MP for Asawase and Chairman of the Health Committee, to commemorate World AIDS Day, which fell Friday.

What's So Special About NAM1 That Akufo-Addo Is Shielding Hi...
13 minutes ago