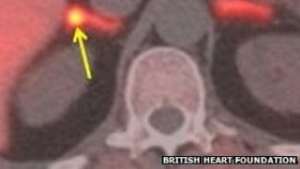 Doctors say they have found a medical test that can diagnose the most common curable cause of high blood pressure.

Conn's syndrome - a disease of the adrenal glands that sit above the kidneys - is thought to be the cause behind one in 20 cases of hypertension.

But until now it has been difficult to detect, requiring a complex series of tests on blood taken from a vein supplying the adrenal gland.

Experts at the University of Cambridge say a simple scan can spot the problem.

The hi-tech PET-CT scan looks for small growths in the adrenal glands that are about the size of a five pence piece, the Journal of Clinical Endocrinology and Metabolism reports.

These benign growths or tumours - called adenomas - pump out too much of a hormone called aldosterone, which in turn raises blood pressure.

The researchers developed a special radioactive tracer called 11C-metomidate, which lights up culprit adenomas in the scan.

Once the problem is identified the condition can be treated either by surgically removing the affected gland or by using a drug to block the effects of aldosterone.

This is important because high blood pressure greatly increases the risk of heart attack and stroke.

After initial success in 44 patients, the Cambridge team is now using the scan on any patients they suspect to have Conn's syndrome.

Reassurance
Lead researcher Prof Morris Brown said: 'We were excited to see our technique work so well, and shortcut the delays and discomforts associated with the alternative test.

'We're using PET-CT on our patients already, but we also plan a larger study to work out who will benefit the most.'

He says the test could be especially important for older patients. 'We often see growths in the adrenal glands during a routine CT scan. Often these growths are not Conn's adenomas, but it's difficult to be sure and they create a lot of anxiety in patients and doctors.

'In the future PET-CT could be a quick way to reassure a lot of patients without the need for detailed investigations.'

Dr Shannon Amoils, of the British Heart Foundation, which part-funded the work, said getting an accurate diagnosis would mean thousands of patients could potentially be cured of high blood pressure.

'There are drugs that can control the high blood pressure caused by Conn's syndrome, but the only cure is surgery, so making the diagnosis is very important.'